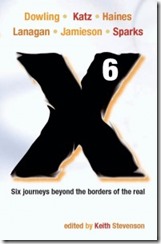 To check out the buzz around this collection when it launched in 2010 go here.

Some choice comments from the link above:

“Wives,” by Paul Haines, is a tour de force: a dystopian science fictional horror story which will alternately shock you, disturb you, and break your heart. - Richard Larson, Strange Horizons, August 2010

“Heart of Stone,” Cat Sparks, X6 – a tightly constructed, plot-driven X-Files style mystery, this one starts out as a quirky character piece but builds up to proper thriller proportions. Like the Haines piece, this novella has a really strong Australian voice to it, through setting and also character and dialogue - Last short story on Earth, October 2009

‘If X6 only contained Margo Lanagan’s rich and evocative fantasy “Sea-Hearts”, you’d be getting more than your money’s worth! But this volume of short novels by veteran editor Keith Stevenson weighs in with over 170,000 words by multiple award winning authors such as Terry Dowling and Cat Sparks … and fiery, up-and-coming “young Turks” such as Trent Jamieson and Paul Haines. Ranging from the sublime to disturbing in-your-face noir, X6 is a brilliant cartogram of what’s happening in Australian genre fiction.’   Jack Dann – multi-award winning author, and editor of Dreaming Again.

On the reputation of Wives and Sea Hearts alone I would buy this.  Wives in particular, is spoken of with such high regard among readers and writers in the Australian scene that the collection would be worth it for that story alone.  Then you have the novella Sea Hearts that formed the seed of Margo’s award winning book of the same name (Brides of Rollrock Island for readers in the Northern Hemisphere). But ice that cake with Sparks and Jamieson and you have a rather rich desert.