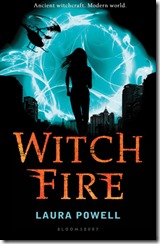 Witch Fire continues the adventures of Glory Starling and Lucas Sterne, that began in Burn Mark.  It’s not necessary to have read Burn Mark; Powell does an excellent job of providing enough back story to fill in new readers and not annoy fans who have already read the previous book.

Powell continues her unique blend of espionage, adventure and witchcraft. The gritty, understated “British-ness” I found in Burn Mark remains and further endears me to the series.  The fact that it’s YA might turn off some readers, but I think you’d be doing yourself a disservice if that’s the reason why you’d make a pass on it.  In Witch Fire actions have consequences, characters die – the descriptions might not be gratuitous, but often I find that implication throws a stronger punch.  I found myself every bit as much on the edge of my seat as I would be with Quintin Jardine novel.

Glory and Lucas have been recruited and trained by WICA (Witchkind Intelligence and Covert Affairs) but its all hush-hush because of their ages.  They are beginning to get tired of the endless training when they are offered their first assignment – to go undercover at a special school for troubled witchkind teens with rich parents.

It sees them both leave England for the first time and the reader begins to get a wider understanding of the alternate reality that Powell presents.  In the background is the ominous threat of an Inquisition that neither of them can quite trust and the shadowy terrorist group known as Endor.

Burn Mark impressed me with the goal driven characters and a generally well balanced take on gender roles.  Witch Fire continues in the same vein.  While there’s a budding attraction between the two main characters, this plot thread is left alone for most of the book.  Lucas and Glory can be as incompetent as each other (they are teens) and are adept at coming to each others rescue.  The secondary characters are also competent (they are intelligence operatives) and gender diverse.

I did feel that the make up of the nationalities at the school was a little “cookie cutter” stereotypical i.e. a Chinese witch who is really quiet and plays the piano expertly, an American cheerleader, a sleazy Latin-American playboy and the sister of an Indian Bollywood star. It was the only hiccup in what was a very smooth read.

Witch Fire picked up the threads that were left hanging at the end of Burn Mark and wove them into a compelling and expanding story, major character goals were realized, villains encountered justice and yet it does not feel as though the story arc is anywhere near finished.  I don’t think “issues” should be the focus of every book written for teens but I think Powell gives us a great story, well realized characters and a world that can be examined for its prejudices from a safe distance.

I’ll repeat my concluding comments from the review of Burn Mark.

If you’re a fan of British crime or espionage drama I think you’ll enjoy this read.

This review copy was provided by the publisher at no cost
Did you enjoy this review? Would you like to read more? You can subscribe to the blog through a reader,by Email or Follow me on twitter.
Posted by Sean Wright at 2:36 PM