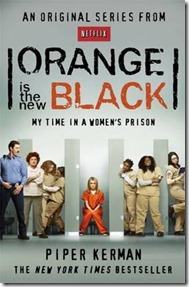 It’s school holidays and I have just mainlined series one of the TV show Orange is the New Black.  It’s an engaging series and particularly refreshing in that the cast is weighted towards women (obviously being set in a women’s prison).  Lots of women’s stories and back stories and Piper acts as a great touchstone of white middleclass people like me.

The memoir Orange is the New Black by Piper Kerman forms a very loose framework for the series.  If you are looking for what might happen after Pennsatucky and Piper fight then you won’t find it in this book(I am aware that I am behind in the series), indeed if you are looking for a broad range of women’s stories ala the TV show then you won’t find it here.

Orange is the New Black is focussed on the real Piper Kerman, it’s her story.  In some ways the memoir is less dramatic than show, less of an entertainment piece and more of journey of self discovery and a critical look at the US correctional system, as perhaps it should be.  I’d personally be a bit wary about telling the stories of other inmates.  When a person has had their freedom removed and much control over their own life curtailed, taking their story is the last thing I’d do.

Having finished it, I am left with a nagging concern about modern correctional systems.  If the prison system operates as Kerman says it does under the US Government, I am doubly concerned about those instances where corporations run correctional facilities, like our offshore gulags for refugees.

It was an engaging read, worthwhile reading if you have a very black and white view of incarceration.