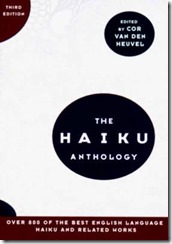 For any compendium of Haiku to make it to wide publication seems amazing (from my reading, Haiku was/is generally supported almost exclusively by small press in the west) but The Haiku Anthology made it to a 3rd edition and until Haiku In English - The first Hundred Years, was probably the latest and largest collection of quality English Language Haiku and Senryu in print.

It catalogues works from the beginning of the genre in the west to the late 1990's and reading it does give you some idea of the various historical changes and trends while  also displaying the variety of approaches in what seems like such a restricted form.  If I have one minor gripe, it’s the absence of works outside of North America.  I understand that in earlier editions it included the work of  Australian pioneers like Janice Bostok and possibly for space and target market reasons these have been dropped.

The Haiku Anthology includes the previous two edition’s introductions (yes that’s three different introductions) all in reverse chronological order.  This was  informative and provided historical information that’s likely to get forgotten as the genre moves on.

There’s a broad range of nature and urban Haiku and the Senryu vary from the rude and obviously comic to being difficult to decide whether they are Senryu or Haiku:

bends over the tomatoes

it rides off the table

There’s some early work by JW Hackett in the 5-7-5 format:

Half of the minnows

within the sunlit shallow

are not really there

and then there’s Nick Virgilio’s work, which demonstrates the form’s applicability to urban situations:

weakens in the wind

and it’s power to handle grief and passing

In terms of gender representation the collection is about 70/30 in favour of males, which I found interesting in the context of the Australian scene which seems largely dominated by women.  Perhaps its the effect of early proponents such as the Beat Poets (Kerouac and Ginsberg) who lent it some early legitimacy/cool for men interested in the form.

For the poet who intends to write Haiku, the anthology is a must have (either this one or Haiku in English above, which I take as a 4th edition, Cor van den Heuvel I assume, having passed on the editorial reins) even if it’s just for the ease of having a large number of quality Haiku readily at hand.  Additionally If there’s one thing that is annoying about Haiku, it’s not being able to easily track down print collections of quality proponents.  I have been trying to track down copies of Anita Virgil’s work and this collection is about the only place you’ll find a large number grouped together in print.

For the general reader, it might be a bit much to take in at once.  Haiku is one of those forms that gains depth with more understanding of the technical aspects.  So it’s worth figuring out how a good Haiku is constructed while reading the collection.  That being said, some of the Haiku and Senryu contained don’t require an understanding of the form and are “wordless” in getting their image across.