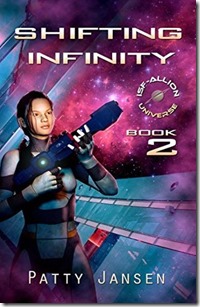 Shifting Infinity is the second novel set in Patty Jansen’s ISF – Allion Universe and continues the story and characters presented in Shifting Reality.  I thoroughly enjoyed Shifting Infinity for the same reasons I enjoyed its predecessor and the various novellas before that which have slowly built the wider universe.

So what do I like?  The story chiefly.  I read it in two sittings and if I’d had another book in the series to read, I’d have read it as well.  Stylistically, I think the prose is fairly transparent, it does a very good job of letting the move along and makes it approachable.

I find it can be hard to categorise the content.  Jansen includes aspects of Military SF, Space Adventure and Competence SF.  She underpins the whole world with solid Hard SF world building and manages to introduce a diverse set of characters (diverse genders, religions, races).  All of these combine to give the work broad appeal.

There’s also a wider universe with epic potential. There are teasing snippets/clues laced through all the works that Jansen has written in this series that hint at larger forces at play but Jansen brings the focus down to one character Melati, a scientist/ teacher of Indonesian background.

The character has grown in confidence and ability from the first book and I am really enjoying Melati’s development. At one point I felt that Melati’s training in weapons might have been a little to quick to achieve the competency she later displays but then again I am forced to confront my own lack of experience and knowledge of firearms training and question my assumptions.

So what’s happened since Shifting Reality?

After Allion ( the forces that oppose ISF)  captured the New Jakarta space station, Melati  made it to the safety of the ISF warship Felicity but had to leave her family behind.  She joined the ISF force division in the hopes that they would liberate the station.  Instead the Felicity has laid siege to New Jakarta for 10 months.  Melati is increasingly frustrated with the slow movement of the ISF which seems to be content to play a conservative approach, and not care about the thousands of civilians trapped under deteriorating conditions

A rare escape from New Jakarta, a merchant who appears to have been tortured, is caught by ISF patrols.  Melati with her specialisation in constructing Mindbases (AI intelligences for vat grown clones) is called in to help, although the ISF seems keen to execute him as quick as possible as a spy.

The reality is much more interesting though.

Shifting Infinity is a page turner and should have something for everyone.  A believable, if at times annoyingly self-doubting protagonist(don’t get me wrong I really like the character and my annoyance is a good indication that I am invested) who is not your usual hero.