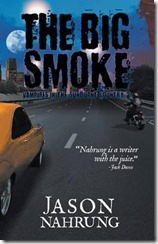 I doesn’t seem that long ago that I was reviewing Book 1 of this series, Blood and Dust but it’s been two and a half years.

Blood and Dust was initially released through Xoum digital publishing, both it and The Big Smoke have now been picked up in paperback and digital formats by genre specialist publishers, Clan Destine Press.  I read The Big Smoke in two sittings and although time has dulled the memories of how well paced Blood and Dust was, I have a feeling that Nahrung has got better (which is significant considering I already had a high opinion of his work).

All the stuff that I liked in Blood and Dust is here; a distinct Australian flavour that doesn’t strike the wrong chord and cause me to cringe(culturally), well articulated differences between city and country, there’s even state rivalry.

Relocating the story to the “Big Smoke” (slang for The City) brings with it some challenges, specifically creating a believable culture of vampires living in the capital of the Queensland.  In Blood and Dust it was just a vampire bikie gang versus corporate vampires and Kevin caught in between.  In The Big Smoke, there’s got to be more cultural complexity and those cultures have work together as well as under/ along side mundane society.

Here I think Nahrung has done exceptionally well filling out vampire culture in Brisbane and hinting at the rest of Australia.  If we don’t somehow get another book in the series, it won’t be a stake through the heart but I will be sorely miffed.

There’s the Von Schiller organisation and a whole host of competing vassal families somewhat reminiscent of the world of the Godfather, where the Don is an ancient Teutonic vampire with access to the vampiric equivalent of elite paratroopers.

The plot is deceptively simple.  Kevin Matheson has come to Brisbane to kill the vampire that killed his mother and consumed her memories.  As if Kevin being turned himself wasn’t enough, Mira Von Schiller had to desecrate his mother’s memory.  So, all Kevin has to do is storm the near impregnable Thorn, a latter-day fortress of concrete and glass and kill her.  Only it’s never that simple.

Not quite the road trip that Blood and Dust was, The Big Smoke still manages to feel like high octane excitement and Nahrung has been quite content to let some of his darlings die and not rise again. A classic revenge tale combined with internecine Vampire politics, a touch of hard boiled cynicism and a body count to match a Bruce Willis movie.

More of this Mr Nahrung and a movie/television miniseries starring Aaron Pederson as Taipan if you please.

This review copy was provided by Clan Destine Press.