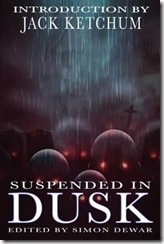 Whoa! Is this review overdue?  Initially received before I entered into reading for the Aurealis Awards, it’s survived a couple of e-reader crashes and short fiction burnout.

A first outing for Dewar, Suspended in Dusk is a solid foray into horror short fiction with some great work from more well known names and some pleasant surprises.

It’s also the work that made me confront my own high(unrealistically so) standards for horror.  I don’t now what it is but for some reason if you slap the word horror on something I expect to be horrified and really that’s an unrealistic expectation, one that’s not applied to my reading of say fantasy or science fiction.  Indeed in most speculative fiction I am content to be merely entertained.

And horror can be so personal.  I can remember being terrified by Dracula as a preteen but now Vampires have lost most of their horror for me.  No, for me the horror is in the real.  In those situations that can occur.  Zombies, Vampires, Werewolves are the stuff of action tales.

So the only tale that approached that ridiculously high threshold for horror was Tom Dullemond’s Would To God That We Were There, a story about a human mission to Mars.  On reflection I think its Dullemond’s ability to get the psychology right in this one that made the horror work.  We are presented with protagonist who is matter of fact in telling the story. We are drip feed you details that allow us to piece together the horror just before it becomes blatant. It’s the everyday monster that we can’t see. I shivered.

If we view the work through the prism of entertaining and engaging stories Taming the Stars by Anna Reith gives the reader a different angle to the vampire milieu.  It’s not that this sort of story hasn’t been written before, but I enjoyed the language and style. Likewise with Alan Baxter’s Shadows of the Lonely Dead, I saw the ending coming but sometimes you like to have some types of stories repeated, even if it’s to confirm the fantasy that justice prevails.

Interesting for its unique take on both the Post Apocalyptic and Ghost Tale genre’s is SG Larner’s Shades of Memory, sort of the Dark Tower meets MR James plus a touch of gore.  It’s the first story that feels noticeably Australian to me as well.

Sarah Read’s Quarter Turn to Dawn was another case of putting a new spin on an old idea.  Despite the fact that what was happening in the story was blindingly obvious, I was engaged in the story, characters and her evocative descriptions of coral zombies.

Finishing the collection with The Way of All Flesh by Angela Slatter was a judicious approach I think.  So much of what I have commented upon above, is present in this story ie standard horror tropes and settings . But oh, the tone, the word choice, the register and the structure- damn near perfect.  Slatter could probably write a shopping list at the moment and make it an engaging bit of art.  Did it horrify me? No.  But it was like drinking a fine wine, knowing you were drinking a fine wine and having all expectations met.

There were stories that didn’t grab me at all.  But I’ll go back to my point about Horror being intensely personal, possibly more so than the other subgenres.  The stories that stood out to me, play to my likes and preferences or were just damn good.  It’s a solid collection with some standouts.  A good collection for a debut editor especially around so slippery a theme as Dusk.

The review copy was provided by the editor.