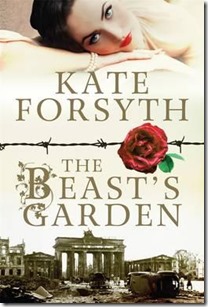 Very well known for The Witches of Eileanan Series, Kate Forsyth continues to establish a foothold as a writer of historical fiction for adults.

It began (at least in my reading of her work) with Bitter Greens, which managed to blend historical fiction with myth and fairytale; to give the reader a set of tales that inhabited a narrative borderlands where the fiction and non-fiction elements were separated only by a thin veil.

Then with The Wild Girl, (Forsyth’s tale based on the life of Gretchen Wild), the fairytale element formed part of the backdrop, informing the story or perhaps underlining it.  Readers were given a well researched and imagined historical.

The Beast’s Garden, is slightly different again.  It’s a reimagining of one of the early Grimm tales, The Singing, Springing Lark.  So if you know the tale then the plot might not present too many surprises.  Then again part of the fun in reading fairytale remakes is seeing what the author does with the story.  I must stress though, while based on the plot of The Singing Springing Lark, The Beast’s Garden is not in the least bit fantastical.  Indeed in the afterword, Forsyth informs us, that apart from the central characters and their families, all the other major players are historical figures.

While ostensibly a love story, there’s tension and action reminiscent of the World War II thrillers I grew up reading and watching.  The setting is Berlin 1938-45, covering the rise to prominence of the Nazi’s and the effect of the regime not only on the Jewish-German Berliner’s but on those who saw their beloved country torn apart by an ideology of hate.

In The Beast’s Garden we have Ava (the Beauty) the third daughter of a previously prominent Professor of Psychiatry, she’s inherited her mothers Spanish looks and talent for singing. Her family is close with the Feidlers, a Jewish family whose father worked with hers and whose mother practically raised Ava after her own mother’s early death.  We have Graf Leo von Löwenstein.(The Beast) an officer in the Abwehr (German Military Intelligence) who is smitten by Ava’s beauty and her forthright spirit in the face of the regime.  What follows is chiefly Ava’s and Leo’s story as they struggle against the fear and the regime, each in their own way.

Writing an historical fiction set during World War II is a daunting prospect – it’s a period that’s been worked over considerably in non-fiction, fiction and by Hollywood and countless other entertainment industries.  Indeed some 75 years on and it isn’t hard to find a contemporary project based on this era of conflict.  Then the writer must consider the Holocaust, how to handle a reality that still effects so many.

So the bar is set high, I think for a writer who wants to write fiction that entertains but is also true, not only to the written history but the emotional one.  I think in this case Forsyth has done well.  The holocaust is not glossed over and it’s not played on to manipulate our emotions.  There are scenes set in Buchenwald, but Forsyth keeps the emotional focus tight on particular characters and their attempts to survive. The enormity of the holocaust (hard to envision on a personal level) is revealed through juxtaposing reports received by Leo of the mass exterminations with what the reader knows from the prisoners point of view – a personal response magnified by numbers on a page, large numbers.

I also felt that Forsyth captured particularly well the state of fear brought to bear by the Nazi’s not only on the Jews but on other Germans who didn’t support the regime - fear of being reported to the Gestapo by your own servants or family members.  Much of what propelled me through the novel was Forsyth’s ability to sustain tension, fear of the authorities, fear of being discovered engaged in subversive activities, fear of those you love.

There are many stories in war and with 75 years of storytelling the action adventure angle has been done with varying degrees of success.  The Beast’s Garden is not about strikes and counter strikes, hero’s storming the beaches but it’s every bit as engaging. It’s a very human story, about what small groups of people can do, what we hope people would do when faced by an evil that is unacceptable.

This review is based on an uncorrected proof.