Gender Bias in Publishing? Not us says Allen and Unwin

So apparently Allen and Unwin got a bit of stick for their advertising this year in regard to gender bias.  Well according to the self described rant at Things Made From Letters.  The post troubles me for a number of reasons.  And strikes me as another post from a publishing house (or publishing house insiders) 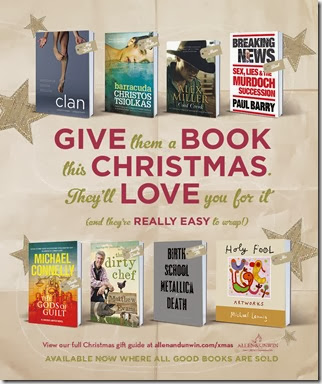 that’s less than professional or perhaps a little unwise.  I did a search for criticism and found nothing on Google, nor Twitter. If you can find what The Onions at Things Made from Letters were talking about in regard to criticism then let me know.

Anyway here is the advert, or one that may have caused the issue.  You will notice not one book by a woman.  So how do our Onions(and at this point I did wonder Onions—> Onion –> Satire) respond to this charge?  With a calm explanation of the process that led to the claim?  Well let’s see.

We’ve recently been taken to task for showing gender bias in some of our advertising. If it weren’t so funny it would be kind of sad.

Oh dear.  Interesting way of opening; casting disparaging comments about your critics as if there were no issue (one could argue that this tone begins with the title but I’ll pretend that the question was asked with sincerity.  We’ll move on shall we?

When we prepared our Christmas publishing program this year, and the promotion schedule to support it, never did it occur to any of us that it favoured male writers or subjects. The really silly thing is, if we’d undertaken a similar campaign last year the so-called bias would have had women writers and subjects holding the balance.

This paragraph says volumes ( and again I look over my shoulder and wonder if I am being poe’d.)  The bit that I think is most enlightening is never did it occur to any of us that it favoured male writers or subjects. Indicating that there’s no belief nor understanding that humans no matter how smart, liberal, or educated are subject to biases and that a raft of these are subconscious or implicit. Indicating that Allen and Unwin don’t have anything in place to try and screen or at least get them to reflect on possible biases they might have on an individual level or as an institution.

Then there’s another attempt to ridicule their detractors.  They are not just funny this time but silly ie The really silly thing is. If I was being really hard core I’d even suggest that the use of silly as a descriptor is gendered, as in silly girls.  But not knowing the gender of those who complained we’ll let that slide.

The rest of the paragraph implies a point without directly making it.  That the gender of writers published each year is dependant on the books that they receive or that sell well and that “if we’d undertaken a similar campaign last year the so-called bias would have had women writers and subjects holding the balance.”  Note the use of so-called (methinks they are pretty sure they aren’t biased) but note also the if.  If they had done it last year the situation would have been reversed.

If you had, Allen and Unwin, but you didn’t and so the point is moot.  What would have been better here is some stats and a look at what actually was run as the campaign last year.  Less of the dismissive “down your nose” attitude that, dare I say, might lead detractors to think you really don’t think there is a problem.

To say that gender doesn’t enter our thinking about anything here at Allen & Unwin is a serious understatement. We are a company overrun by women. Of the senior management team only 10% are men.

Not sure what this is meant to suggest.  That women can’t have biases against women (nor against certain genres now that we are thinking about it) that we don’t absorb attitudes to others from the culture we grow up in?

Allen & Unwin does not take on a book simply because it’s by a man. Neither do we consider one book over another because the gender balance needs to be redressed. We take on a book because of the quality of the writing. Period.

I would hope they don't take a book on because of the author’s gender and I think those days are long gone ie blatant sexism.  But “The Onions” have already indicated that at Allen and Unwin there’s no concept of implicit or subconscious bias.

I would hope that they take on a book because of its quality, marketability or both.  I want A&U to make money so they can keep publishing some of my favourite writers.  I note the veiled dig at tokenism with comments about redressing the balance.  Thing is, if no one at A&U is contemplating whether or not, at any of the many doors a work has to pass through to get published, that there might be subconscious bias operating, then… well you are going to have your publishing skewed by bias, gender or otherwise.

Allen & Unwin has a long and proud tradition of publishing feminist polemics, humorous takes on the state of gender politics and of showcasing the writing of some of this country’s best writers: Michelle de Kretser, Kate Morton, Danielle Wood, Kerry Greenwood, Marion Halligan, Charlotte Wood, Kate Grenville, Maureen McCarthy, Ann Fienberg, Margot Lanagan, Kathryn Heyman, Marele Day to name but a few (and they’re just some of the novelists).

You’re  lucky you included Margo in that list.  But hey, this is more like it, here’s some evidence.  I’d still like to see some navel gazing, some contemplation about other issues raised.  There’s also the point that, presented in isolation, these names might be meaningless.  How many male novelists by comparison.  How many books by has-been sports stars?

Should further evidence be required, it bares pointing out that Allen & Unwin proudly and very successfully published Kerry-Anne Walsh’s Stalking of Julia Gillard earlier this year. Hardly the actions of a publisher with anti-female gender bias.

The further evidence required would be stats of books published over time and a thoughtful interrogation of these stats.  What we don’t need in this discussion is off the cuff defensive rants.  We need a serious investigation/consideration from the people who have the information ie publishers.  I note here  the phrase anti-female gender bias, which again belies the authors’ fixation on conscious or blatant bias.  It seems quite obvious to me, as they say in the the second paragraph… they never thought, because you can’t think about something you are not aware exists. I doubt there is a conscious anti-female gender bias at Allen and Unwin or any other publisher (though I have heard of some stories around gender and Science Fiction authors).  Here is where I think the article in all its misguided glory should have halted.

The last line is a doosie:

It shames us all that Australian culture and politics have driven some people to this kind of petty griping. Thoughts?

It shames us all?  What a distasteful start to a sentence, to group us all together, to attempt to “force team”* your reader into feeling shame.  And I don’t understand the slight against Australian Culture and politics.  Is it a swipe at the Julia Gillard’s standing up against blatant misogyny (surely not, for as they say they published the stalking of Julia Gillard)? Surely the fact that we are talking about gender bias is good?

Are we really all just jumping at shadows with petty gripping?  Were there no women published by Allen & Unwin in 2013 that could have been stuck on that banner? So hang on, lets see; funny, silly and petty. I get the feeling that A&U doesn’t think much of its detractors.

Funny as in odd, silly and petty- pretty much sums up what I think of the article.

If Allen and Unwin were really concerned about putting the claims of gender bias to bed, they’d take the issue seriously. They’d not throw a tanty.  I know Allen and Unwin publish female writers, all my Allen and Unwin books are by women authors.  Gender bias in publishing, reviewing and the wider culture is a serious and complex problem and one that not only publishers are responsible for addressing.

The issue deserves more than this.

* A concept taken from Gavin DeBecker’s A Gift of Fear – I bit of linguistic sleight of hand to imply that (in this case) the author and reader are part of the same group, share a predicament when that’s not the case.