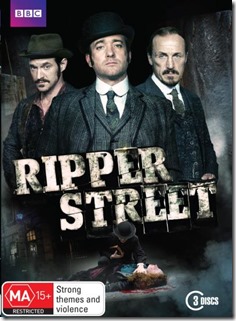 With work over for the year and more time on my hands I thought I’d catch up on some old favourites and some of the newer series that I missed on television this year.   I am finding that I watch television less and less outside of ABC, SBS and NITV and even then the idea that I should be tied to a broadcast schedule in this day and age seems ridiculous.  Too much reading, blogging and podcasting to be done while wasting time trying to remember when a show is on.  So it’s DVD’s. If the show is good enough it’ll make it to DVD and then I can mainline it.

For those of you pacing your viewing and without a PVR here’s the series’ official show blurb:

Haunted by the failure to catch London's most evil killer, Jack the Ripper, Inspector Edmund Reid (Matthew Macfadyen) now heads up the notorious H Division - the toughest police district in the East End. Charged with keeping order in the blood-stained streets of Whitechapel, Reid and his men find themselves fighting to uphold justice and the rule of law; but always in the background lurks the fear of the Ripper.

The shadow of the Ripper is still felt in the neighbourhood by the vigilantes, the sensation-seeking newspaper hacks and the men who hunted - and failed to find - the notorious murderer. It seems that even though the notorious killer has disappeared, there are plenty more willing to stain the streets of Whitechapel with their victims' blood...

So essentially it’s a police procedural set in late 1800’s England.  To my mind it has several things in its favour.  It has its fingers in both the Crime and the BBC Costume Drama pies, it takes advantage of the growing love of neo-victoriana (reflected in things like the Steampunk subgenre/culture). It also seems to be spring boarding off the successful movie enterprise of the Robert Downey Jnr. Sherlock movies.  It’s more than just being set around the same time and being part of the detective/procedural genres though.

Take note of the lettering above and then run an image search on Sherlock Holmes, not an exact copy but there’s a family resemblance.  Note also the title music in the title sequence:

Some haunting fiddle music that reminds very much of the title music to both Sherlock Holmes movies.   And if that’s not enough to whet your appetite for late 1800’s grunge then we are treated to a rather brutal prize fighting scene (sans the Guy Richie choreography and styling) featuring Brom, or rather the actor Jerome Flynn.  But that’s where we leave the similarities, well maybe apart from the costumes which are delightful, dark and deep in tone.

Episode One: I need light, is a good start to the series.  There’s some nice set ups for conflict that I imagine will continue throughout the series. Detective Inspector Edmund Reid played by Matthew Macfadyen is one half of the deductive duo that failed to solve the Ripper case some six months earlier.  He’s hulking and brutish but in a controlled way, willing to use everything at his disposal whether it be the fists and temper of Sergeant Bennet Drake (Flynn), new technologies or the services of ex-Pinkerton and US Army Surgeon, Captain Homer Jackson played by Adam Rothernberg.  I have to tip my hat to the folks at BBC for the inclusion of this American character, broadening the appeal of what is essentially a very British drama.  I must admit though, that the references to him being the only competent Surgeon (the English ones being drunks or incompetents) felt like it was blowing smoke up certain viewership's orifices.  Is there a “competent American”  trope?  The sensationalist newspaperman Fred Best is played well by David Dawson, summing up in his performance, everything we hate about grubby journalism.

You may note at this point a lack of reference to female characters.  One problematic feature of this episode is that it’s pretty much a sausagefest with the parts women get to play being either dammed whores or God’s police.  Mrs Reid played by Amanda Hale gets about 5 seconds air time and one or two lines where we learn that she has just returned from Church. MyAnna Burning gets more screen time as the Madame Long Susan, and Charlene McKenna gets several scenes on her back.  If I can extrude one positive here its that we do actually get to see some women experiencing sexual pleasure from oral stimulation by a man (not explicit) in stark contrast to the very male centred sex scenes featured in Game of Thrones - I do wonder if this scene might be cut for American TV.

I will note that there was also an absence of POC, even in the background, which strikes me as a little odd considering the time and place.

In terms of plot, episode one sees the potential return of the Ripper with the body of an alleged streetwalker left in circumstances similar to the Ripper case.  What unfolds is an insight into the dark world of 1890’s pornography and the birth of snuff films.

It’s a well paced episode that doesn’t just rely on the decoration to wow the viewers, there’s substance beyond the vicarious thrills.

Booktopia has it in both Bluray and standard format.  I am viewing the standard DVD.