Book Review - The Year of the Ladybird by Graham Joyce 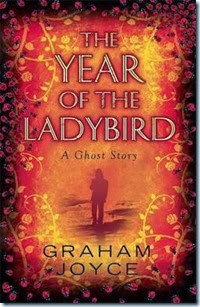 I have been hanging out for The Year of the Ladybird since I heard Graham Joyce taking about it on an episode of the Coode Street Podcast (Episode 171).  Since that episode aired over a year ago I have been collecting Graham Joyce books whenever I have the chance.  Now, being a reviewer, lots of the books that I buy for myself end up on the “personal” to be read pile rather than the “reviewing” to be read pile.  Consequently I haven’t read any Graham Joyce but The Year of the Ladybird.  I did start on Some Kind of Fairy Tale but felt myself falling into the book and had other work calling me.

The Year of the Ladybird was purchased as part of a leaving gift from my job as a Librarian and as such I decided to splurge and get the hardback edition in all its orange/red glory. So was it money well spent by my colleagues?

While I didn’t find The Year of the Ladybird nearly as captivating as the first few pages of Some Kind of Fairy Tale, Joyce has that rare talent for captivating and engaging storytelling.  I didn’t feel an overt emotional connection with the characters.  Some authors (Daniells, Wilkins, Lanagan) are excellent at the ability to toy with reader emotion.  I felt Joyce a little more tempered in this story, sure there’s one particular scene where the protagonist David isn’t sure if he’s involved in some sort of serious criminal activity but for the most part I think that this book’s strength was the recreation of time and place for the reader.

The Year of the Ladybird is set in the mid seventies, in a time of political turmoil with the rise of neo-fascism in England.  It’s summer and England is in the midst of a drought.  The protagonist David Barwise has returned to the seaside town of Skegness to work at a holiday camp.  Away from home and the life his mother and stepfather want for him, David sets about enjoying the freedom of growing into a young man. His choice of Skegness is not random though, he was brought there by his father while still a young boy and much of the novel is David picking away at the obscured memories of this time.  David keeps seeing an apparition of a man in a blue suit accompanied by a small boy.  The reader is not sure if these visions are the results of the pressure of new experiences or the pressure of being involved with unsavoury and violent characters.

I think Joyce captured the uncertainty of youth, a nostalgia for the past and the drive in all of us to uncover unknown or obscured history.  He has a very light touch and I devoured this within two sittings without realising I was thoroughly immersed. By which I mean it was good. A book that settled around me while I wasn’t watching and led me gently to its conclusion.