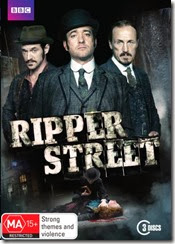 One of my criticisms on viewing the pilot was that Ripper Street appeared to be a bit of a sausagefest * with the only women present being “damned whores and God’s police”.  I am pleased to report that while Episode 2 still contains a good deal of Bratwurst we do begin to see a little more of the variety of Victorian England.  The episode also shies away from what I thought was going to be the overall story arc, that of the Ripper case.  It seems at this point, that it’s destined to be background material.

In this episode a Toymaker is found beaten to death.  The Whitechapel Vigilance Committee ( a historical actuality) apprehends the alleged culprit, a teen by the name of Gower and delivers him to the Police.  The young Gower is made an example of my the justice system and is sentenced to hang.  The boy’s lawyer and confidante of Reid’s wife, convinces inspector Reid to dig a little deeper.  What Reid finds is a  gang of “Street Arabs” (homeless children) run by a vicious Fagan like character by the name of Carmichael; played by Joe Gilgun. We are also introduced to the proprietor of a Jewish Orphanage, a Mrs Goren played by Lucy Cohu.  This is a brutal episode that casts some light on the realities of living in the Victorian East End and hints at the reality of anti-Semitism in England.

Torchwood fans will be happy to see Lucy Cohu (she played Captain Jack’s daughter in Torchwood: Children of Earth) as Mrs Goren.  She plays an understated role, but does broaden our understanding of the diverse makeup of London of the time. She is a Secular Jew, providing care in an age of reforming God-botherers.  I also sense a connection here between Goren and Reid.  He seems more comfortable with her, for example, than his own wife.

On that note we get a deeper understanding of Reid’s relationship with his wife.  She finds a confidante in the reforming Lawyer that defends Gower, someone whom she can talk to about her daughter, who I presume at this stage is either dead or missing.  Inspector Reid is a wall of stoic fortitude on that front.  They seem quite distanced from each other by grief.

Joe Gilgun, is another rising star that plays the viciously evil Carmichael.  You may remember him as Rudy from Misfits or Woody from This is England.  For a wiry scrap of a man he delivers one of the most fearsome characters I have seen on screen for a while.

So in summary; a good(if slightly violent) episode that begins to solidify the show’s identity and one that I think reveals the overall arc that will tie the season together ie the mystery surrounding the Reid’s daughter.

Episode one was reviewed here.  I am watching the standard DVD version.

* It occurred to me that some readers may not understand the term.  It indicates an overabundance of men, with more men getting speaking parts/screen time.