I started doing gender audits of my reading in 2011 and have done one each year - see 2011, 2012.  My reasons for doing this can be found in my first post snipped below:

Some time in March1 this year{2012] I did a gender audit of my reading.  I had been listening to those subversive women at Galactic Suburbia and I really wanted to see how I did.

Now prior to conducting the audit I had a fairly high opinion of myself.  I have no obvert preferences for male writers over female, and I thought on the whole the gender split would probably be fairly close, say 60/40 in favour of men.

As a feminist friendly male reader I had a gender split of 82/18.2  So I set about making a conscious effort to read female writers, especially for my recreational reading as opposed to my official reviewing.[read on]

Now I am doing this one early, mostly as a check on myself, as it’s been a busy year with work and a podcast to run. I have had to let some focus drop.  So without too much focus on what I am picking up to read, I wanted to see if other factors had skewed my reading in anyway.

So as of today the breakdowns are as follows with last years graph below: 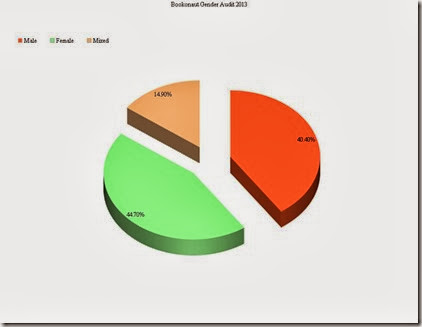 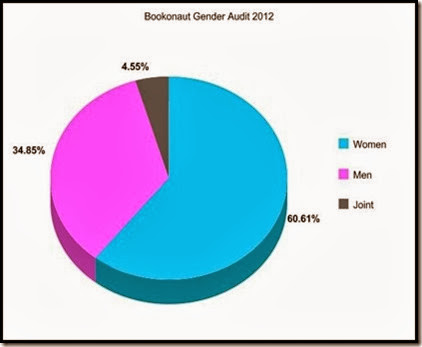 So you’ll note at this point that I have read more collections that feature a mix of genders and that the gender balance of Male and Female authors is more evenly split. I’d have to dig a bit deeper into the actual titles to examine the effect of say major publishing houses versus small publishers on that balance ie does more big publishing titles that I get for review skew the data towards more male authors read.

At this stage I am ok with the results, I like to aim for a 60/40 split in favour of female authors to help correct the situation that occurs in major reviewing publications.

I still had to perception though that I was reading far more female authors than I have. Interesting.