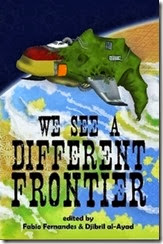 A criticism that I think can be levelled at the science fiction community is that when it comes to diversity we are still not quite there.  Sure there are lots of authors that include a more diverse range of characters in their stories but where I think we struggle is with supporting and promoting diverse authors.  Paolo Baccigaluppi gets noticed for writing about Thailand, but what about Thai writers writing about Thailand using Science Fiction and Fantasy as the framework?

I think that white western writers need to be careful that in the rush to write more diverse characters that they aren’t indeed silencing authors from those diverse backgrounds – the result if you are not careful, is almost a second wave of colonisation.

For this fact alone I find We See A Different Frontier to be a very important book.  Some stories engage directly with the effects of historical colonialism, some tap into the experience, all the stories have something of value.

Beyond that of course is the fact that they are enjoyable fiction for the good stories they tell and the choices the authors make in structure and form.

The Arrangement of Their Parts by Shweta Narayan opens the collection and examines the arrogance that the coloniser displays in regards to the colonised, the perception of the colonised as inferior, especially intellectually.  In this steampunk India Shweta skilfully weaves an moralistic folktale with the main narrative of the story to underline her point.

Sticking with the steampunk theme, so often the preserve of western writers who want to experience the grace and refinement of the Victoria age without examining how that was arrived at, we have Pancho Villa’s Flying Circus by Ernest Hogan.  An American tale ( in a geographic sense) that manages to combine Tesla, Deathrays and Hollywood.  A subtle dig at American cultural colonisation is had here.

Them Ships by Silvia Moreno-Garcia, examines what American rescue might mean for different parts of a society colonised by Aliens.  Mexico has been invaded by largely benevolent Aliens, their Jellyfish-like ships hang over the city and rich and poor alike are contained in cells until the aliens find a use for them.  Silvia contrasts the plight of the different classes, the rich and the poor in Mexican society.  She asks the question would an American rescue mean freedom for everyone? The story, however,  presents the reality that sometimes you just need to do what you can to survive.

JY Yang gives us Old Domes, the first of series of stories that tap into hidden or obscured history.  I think this is about the third Yang story I have read and I like her mixing of traditional concepts with modernity.  The erasure or forgetting of place due to colonialism or progress struck a chord with my experience of living in Darwin, a city where new seemed to replace old within decades.

Dinesh Rao’s A Bridge of Words, carried through this theme of hidden histories.  Our protagonist Riya is a outsider in her own culture- part coloniser, part colonised. This story is a mystery and comment on the way important cultural information can be conveyed through art.

Lotus by Joyce Chng is I think a piece that stresses the need for a different paradigm, a different way of viewing and being, one that does not require endless exploitation of finite resources or theft or control of resources that are needed by everyone. It’s a post-environmental apocalypse piece that argues that we need to stop making the same mistake.

Lavie Tidhar’s piece is perhaps the most experimental story in form. Dark Continents gives us an alternate Israel set in Africa. Tidhar remixes and restarts history before our very eyes, examining and imagining a wealth of possible histories and ending perhaps with an unlikely utopia?

Sunny Moraine in A Heap of Broken Images, focuses on humanity as colonisers of an Alien world where a great atrocity has been committed against the Aliens in the not too distant past.  Our protagonist is a tour guide of sorts who works to guide human scholars and students around the scenes of the atrocity. It is a beautiful story that at its heart discusses the way in  which the coloniser and the colonised set up structures to avoid having to deal with what has happened.

Remembering Turinam by N.A. Ratnayake, has shades of Steampunk but is really the story of a benevolent society colonised by an aggressive and militaristic one.  It is also a brilliant examination of the way in which colonial powers destroy or subsume cultures through language ie the insistence that the colonised speak the language of the coloniser, either through threat of force or by making the Colonists language the one that is most beneficial or necessary.  Ekaterina Sedia has some sombre thoughts on this very point in her afterword.  What did astonish me was that this was Ratnayake’s first professional sale.  I hope we see more from him.

Vector by Benjanun Sriduangkaew left me breathless due to the second person present tense.  It is a story whose form reinforces the sense to produce a direct hard hitting effect. It places you the reader in the driving seat, demands that you experience the feeling of being the colonised.

I have not mentioned all the stories in the collection, but this is not a comment on their quality.  I need to leave some surprises for you to discover.  I can’t sign off however without mentioning the story that bookends the collection. Rochita Loenen-Ruiz leaves us with a very solid and thoughtful piece in What really happened at Ficandula.  The story is based on a historical incident that happened during the American occupation of the Philippines and weaves a historical tale with that of the fantastic.  I had the privilege of talking to Rochita for Galactic Chat and discussing the story and her decision to frame it within speculative fiction.  Her answer was that “facts” surrounding the incident were limited and biased and that this story was the only way to present elements that needed to be spoken about or remembered.  This story left me contemplating my own country’s colonial history. How, stories and histories disappear for both the colonised and the colonists.

The strength of this collection is , not surprisingly, its diversity in story, approach, and form while still being focussed on a theme.  This is a book that anyone that wants to pay more than just lip service to the idea of diversity, needs to read.  It is also a collection that I think you can  point critics of speculative fiction toward when they say that the genre can’t deal with serious issues.

Kudos to Fabio Fernandes and Djibril al-Ayad for bringing these writers together.

This review copy was provided by the publishers.