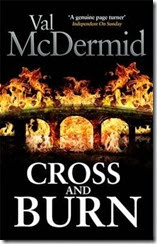 This is my first McDermid.  I dabble in a bit of crime reading every now and again, along with some “Lit” fiction because it’s good to change gears and experience new writing and structures.  That being said I am very familiar with the setting of the book as the other books in the series form the basis for the wonderful crime drama Wire in the Blood, starring Robson Green and Hermione Norris.

In that sense half the work was already done for McDermid, I really enjoy the show and that transferred to the characters in the book.  The cover blurb calls it a page turner and it’s fair to say that once your about 20% in, the pace is fairly steady.  I did at times find the descriptive detail a little long in the tooth, that we were being told rather more than shown but then this is forensic psychology meets crime thriller and there’s just some information that needs to be imparted in certain ways. I was just impatient.

This is about the eighth “Tony Hill” novel and picks up after the spilt up of MIT and the murder of Carol Jordan’s bother and sister-in-law by Jacko Vance.  Carol is retired and blames Tony for not doing enough to save her family.  Tony is confronting the fact that he’s lost the one person(Carol) that he’s come close to loving in the way “normal” people do.  So for most of the book the action centres around the now Detective Sergeant Paul McIntyre a former member of the MIT team who is on a new patch and working for a new boss.

Women are being stalked and abducted by a sexual sadist, budget cutbacks and the disbanding of MIT have resulted in a force that is pushed to meet targets and to impress the Brass with how much they can do with so little.  Paula’s new chief Alex Fielding wants results and wants them quick even at the expense of the innocent.

So a trigger warning if you have suffered any sort of assault.  Is this sort of scenario overdone in crime fiction?  I think there’s an argument for that but then I think the real interest at this point in a series like this is the characters.  I think this one is for the fans who might have been a little broken by Retribution.

It’s a tense thriller that places some of your best loved characters on the wrong side of the interview table.  Fans of the books and the show will no doubt lap it up but I think its an easy entry point to the writings of Val McDermid, there’s really nothing here that requires any previous knowledge of the show or characters.  It must be said if you’re a fan of Robson Green’s portrayal of Dr Hill with his quirky social interactions, then you will get bonus squirm when he’s made a fish outer of water.

My copy also featured a short story about a career criminal trying to go straight.  This was an enjoyable little extra and McDermid did a great job with voice and register.  I do wonder if this is a new character that might get his own series. So if you are looking for a bit of crime and suspense I’d recommend it this is comfort food for those of us that like examining the dark side from the safety of a paperback novel.

This copy was provided by the publisher.  Australian readers can purchase Cross and Burn through Booktopia here.