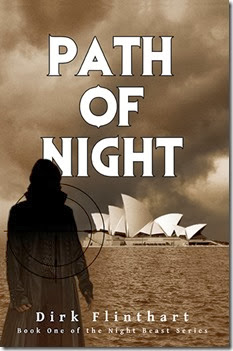 It’s been a weekend of excitement for me so far.  But this bit of excitement is the new Supernatural Thriller from Australian author Dirk Flinthart.  Now if you have been a part of the Speculative fiction community for some time, you should have come across Dirk before.  Most of his rescent works have been short fiction but Path of Night seems to herald a return to the longer form.

Dirk has had a varied career editing Canterbury 2100 by Agog Press, sharing a Ditmar award with Margo Lanagan, and co writing How to be A Man with John Birmingham.  For a full list of his credits see here.

Michael Devlin is the first of a new breed. The way things are going, he may also be the last. Being infected with an unknown disease is bad. Waking up on a slab in a morgue wearing nothing but a toe-tag is worse, even if it comes with a strange array of new abilities.

Medical student Michael Devlin is in trouble. With his flatmates murdered and an international cabal of legendary man-monsters on his trail, Devlin's got nowhere to hide. His only allies are a hot-tempered Sydney cop and a mysterious monster-hunter who may be setting Devlin up for the kill. If he's going to survive, Devlin will have to embrace his new powers and confront his hunters. But can he hold onto his humanity when he walks the Path of Night?

Path of Night represents Flinthart's longest published work to date, and is planned as the first in a series of stories centering around Michael Devlin.The next one is well under way...

Interested? You can purchase both print and ebooks from Fablecroft.

So expect a review from me soon.