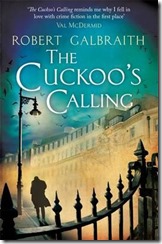 Unless you have been camping in the wilds of New Zealand you’ll have no doubt heard that The Cuckoo’s Calling, a solid and entertaining debut novel from Robert Galbraith, is in fact a new crime novel by novelist JK Rowling.  It is interesting to note that prior to a leak outing Rowling as an author, that the reviews were largely positive, and sales modest.  Cue the leak and a quick review of Amazon one star reviews and the book snobbishness and the Rowling hate is palpable.

A supermodel commits suicide, but her brother doubts the police findings.

Private Detective Cormoran Strike, homeless and having just dumped his manipulative girlfriend, is watching his business fall apart until John Bristow brother of Supermodel  Lula Landry, comes asking for his help.  It looks like an open and shut case but then the client is paying double.

But what about the book?

This is in fact the first Rowling I have read and on this experience alone I would read more in the Cormoran Strike series.  If you are looking for a thriller paced mystery then The Cuckoo’s Calling isn’t for you.  It’s a very British murder mystery, by which I mean it has that cynical slightly gloomy edge to it and it’s a methodical detective story. Its not without tension and suspense but if you are looking for high octane thrillers Childs or Eisler are your best bet.

Like all good mysteries it strikes just the right balance between giving the reader enough clues to go on and letting slip the reveal too early.

On typing this review I am struck by the similarities, or the similar backgrounds of Strike and Lee Childs’ Jack Reacher .  On the one hand you have the all round, square jawed American hero and on the other you have Cormoran Strike. Strike is likable and believable as an ex-SIB investigator and I applaud Rowling’s decision to make him an amputee, slightly overweight and still saddled with the school yard moniker “pubehead”.  Out of the two I find Strike more believable.

Robin, the temp secretary with an eye for detail and a secret desire, I think to be a detective, developed nicely into a competent sidekick.  I can see and indeed I hope this turns into a more Watson and Holmes sort of relationship where she gets her hands dirty and develops her natural talents.

I must admit that I enjoyed the subtle digs that Rowling had at the press and the glitterati.  These I possibly would have overlooked had I not known it was her writing the book.

I you like the slightly darker tone of British mystery writing and the logical unravelling of a conundrum then this is the type of book for you.

This book was provided at no cost by the publisher

You can purchase the trade paperback version through Booktopia here.