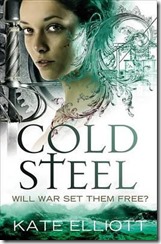 This is the first Kate Elliot I have read and I sincerely wish that it wasn’t.

For you see, I really love it, the writing and the world building.

It’s that way with reviewing sometimes, you’ll get book two of a series or book three without having had a chance to read the preceding books.  I often joke that my super power is reading the last book of a series(without having read the others), most reviewers I don’t think would bother – the dilemma of wanting to give an author a fair go but not having the time to chase down and read the other books.

So yes damn it I took one for the team and am grateful.  I’ll track down the preceding titles and read them in my own time.

I think most competent writers today interleave enough back-story in their second and third books for a reader with sufficient imagination to come in cold and pick up the threads and run with it.  Elliot seems to have done that exceedingly well here and I would need to have read previous works to pick out the weave, for their were no glaring info dumps – she’s a polished writer no doubt.

As a book it stands well enough on its own, feels very much as though it has definite beginning, middle and end.  The resolution was one that I had not expected but fits very well within the themes of the novel.

For those of you not to have had the pleasure of reading Elliot’s other works in the series Cold Steel is set on an alternate earth.  The introduction of magic, an ice age and altered landmasses make it fantasy rather than alternate history.  If you had told me that it mixed sentient dinosaurs, roman legions, Amazons, magic and the beginnings of a worker’s movement I may have winced.

Elliot has done a splendid job though of making the world and its oddities blend together in a way that causes tired and clichéd topics to pop with freshness.

I can’t fault her on her characterisation either, she presents well rounded “real” women, strong in a variety of ways as you would expect of real women.  We have fighting Amazons, Demagogues as well as politically savvy social climbers. The men are an equally well rounded group of individuals. The trolls – sentient Troodons, are a very interesting take with some scientific underpinnings.

Cold Steel and the preceding books in the Spritwalker series, Cold Magic and Cold Fire can be purchased from Booktopia