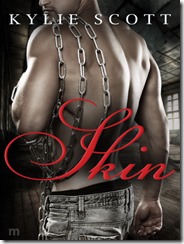 I honestly didn't know what to expect, I mean you expect a certain amount of sauciness and zombies but I have been burned before by titles pitched as genres they are not.  Scott's a self confessed B grade horror fan so I was perhaps thinking  it might be a little camp in its delivery.

I was pleasantly surprised. What I got a well balanced combination of romance, action and erotica. That surprise is I think revealing of an acculturated aversion to romance.  I read this rather brave post by Delilah S. Dawson and it reinforced again to me what silly ideas the genre community and particularly male segments of it have toward anything that suggests the romance genre.  Nobody beat me with a stick every time I looked at a romance cover so I don’t understand why I have (had)such a subconscious reaction against it.

Kylie Scott writes well,I could not get through a paragraph of Fifty Shades of Grey, but Skin I couldn't put down.  Should I be surprised at this? It’s not any less hard to write an engaging zombie romance than it is to write an engaging epic fantasy and if you think it is maybe reflect on that thought.

With a debut as good as Flesh, Scott had a reputation, with me at least, to uphold.  Leaving behind the characters in Flesh she embarked on a new premise, a new story line set in the same post apocalyptic Queensland.

Our main character is a school librarian, cooped up with the remnants of the staff and student body (that's horror if ever I have heard it) until they vote her out and sell her to a guy that's got a van load of supplies.  Moral of the story- don't trust the Maths faculty.

So here we have a scenario that's looking like its going to delve into non-consensual interactions.  My inner feminist began to awaken.  I questioned whether I liked where this story might lead, and what Scott might be exploring.

Scott to her credit pulled it off.  She made the situation believable - our protagonist never presents as a victim to anything but her own desires and there's enough internal monologue that explores her decisions, to suspend my disbelief.

And action, how many romances have the heroin pinning the villain to the a wall with the bonnet of a truck? Ok pinned is being delicate, crushing both his legs is more like it.

The zombies are never more than a plot device to propel the characters, but let's face it that's true of 99% of zombie horror. One thing that Skin does as well as The Walking Dead is this suggestion that we have almost more to fear from those left alive, than by the shambling horde.

If there's one thing that did bug me it was the ending . It felt a little anticlimactic to me. Still, it was a wild ride.  I think Scott's writing was tighter this time around, the pacing smoother.

If you enjoy, romance and well written erotica, if you're a bloke and you might be a little curious about checking out what all the fuss is about, I can't recommend a better gateway read.  It's got close combat, small arms fire, zombies and kink.

This book was provided by the author at no cost.