Book Review – Winter be My shield by Jo Spurrier 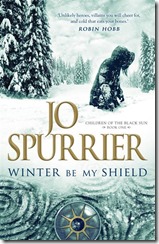 Winter be My Shield is the debut novel from South Australian fantasy writer Jo Spurrier.  It was released last year and the second in the series, Black Sun Light My Way was launched on the first of June this year.

It was one of my personal reads for the year, a non review copy that I obtained at Supanova in 2012. Like many reviewers I have books that I should be reading and those which I purchase and want to read.  The later, has books in it stretching back to 2011.  Winter be My Shield was plucked from the leaning to-be-read-pile by virtue of the buzz it seemed to be generating without significant spruiking by the author.  It was blurbed by Robin Hobb, Trudi Canavan had mentioned it favorably and folks in my twitter stream seemed to keep mentioning it.  If I wasn’t a scientific skeptic I might have said the universe was telling me something.

So did it live up to the buzz?  The short answer is yes.

For me, the tone of Winter be My Shield sits somewhere between the gateway genre works of Trudi Canavan and Rowena Cory Daniells’ Outcast Chronicles. There’s violence and torture but its pitched at a level that won’t be shock to anyone that’s coming to the genre cold.

Mentioning the cold, Winter be My Shield shares similarities with one of Daniells’ other works, The King Rolen’s Kin trilogy, in that it occurs in a snow bound landscape and both tales are shaped by the environment rather than it being just an element thrown in for flavour.  When an author goes to the trouble of considering how weather affects landscape and armies and thereby plot it rounds the tale out, makes it more three dimensional.

But enough of comparing Spurrier to other epic fantasy writers.  What does she offer the reader?  Stylistically there’s nothing in the writing that draws too much attention to itself, I did wonder at some anachronistic word choices in dialogue, but apart from that Spurrier’s writing is pretty transparent delivering  a well paced and entertaining story.  After having abandoned some other debut novels in my reviewing list, Winter be My Shield made the act of reading pleasurable again.

Though pop culture is now becoming saturated with a winter that is always coming, Spurrier’s choice of war in the frozen North still has enough wiggle room to deliver an original tale.  I did perhaps think that she may have been riffing off events surrounding the Varian Disaster but being somewhat of a history nerd that endeared me to the story whether it was the case or not.  Whether its the Wolf Clan versus the Akharian Empire or the Germans versus the Romans everyone loves an underdog and everyone likes to see the pompous getting taken down a peg or two.

The magic was delightfully loose in its description, logical enough for the author to place constraints on it for the purpose of narrative but free enough to give the reader a visual spectacle.  I am not terribly enamoured of magical systems that sound like they are derived from old school D&D and as such the rather elemental magic delivered here, is right up my alley.

The scale is epic, but there's also a nicely developing story of relationships – both romantic and platonic between the main characters.  The stakes are high not only for a people but also for distinct individuals.

I eagerly await finding the time to read Black Sun Light My Way.