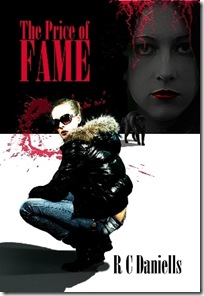 The Price of Fame is Rowena Cory Daniells’ first foray into paranormal crime fiction - hence the slight variation on her name.
It’s a book that’s had a long gestation, something like 20 years, a labour of love, a book waiting to find the right time and the right publisher.

I am an unabashed fan of Rowena’s fantasy titles, I devour them in an afternoon if I’m not careful.  Her pacing’s spot on, characters are  well developed, and she possesses that skill many aspire to- the ability to create a book that you are reluctant to put down.

But that’s Fantasy and switching genre’s means you are stepping into a milieu that has slightly different rules and expectations.  Add to this the knowledge that I am a big ‘S’ skeptic and that my preference, if I have any, for paranormal fiction is that it either plays it totally fantastical (e.g. Burn Mark) where you accept the premise of witches, warlocks and psychics or you play it gritty and realistic with the suggestion, the possibility, the merest hint that something paranormal is going on.

Short version – I read it two sittings, getting sunburnt because I couldn’t but the book down.
Longer Version - Daniell’s plays it pretty straight from the beginning.  We have a documentary maker, Antonia Carlyle, trying to track down old members of the famous Tough Romantics, a punk rock band from the 1980’s.  She’d determined to uncover the reality of the band before they achieved fame, before their singer Genevieve James was murdered by a jealous taxi driver Peter O’Toole.
Only a witness, steps forward 25 years later with a story that may exonerate O’Toole.

Daniells uses first person point of view to good effect in The Price of Fame cutting between Antonia and the murderer, Peter O’Toole’s story written by the reclusive writer and witness who befriended him. It allows Daniells to vary the pace and prevents the reader from getting tired of being in Antonia’s head all the time.  The technique also allows the reader to observe personalities common to both time periods in a slightly different light.  It also gives us intimacy.

I have only ever been to the trendy version of St Kilda and so have no real life experience to compare Daniells recreation of 1980’s St Kilda to, but she created a palpable and believable, crime and drug ridden inner city suburb that any city dwelling reader could surely find a reference to.

With or without restless spirits

The writing and the pacing, overrode my aversion to  “psychic energies”, the characters were real, the ending a mix of triumph and sadness.  While I think The Price of Fame is a one shot, I hope Daniells decides to play in the crime fiction sandpit again. I’ll read it with or without restless sprits.
You’ll note the absence of a “tramp stamped” vixen on the cover. I think it frames the book well -  I heartily recommend it if your preferences are towards realism with a slice of the fantastic.