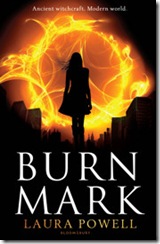 Burn Mark by Laura Powell is an exciting start to a new series that blends the paranormal, witches in this case, with espionage, crime and conspiracy.

I am reminded of Kate Griffin’s Mathew Swift Series, in both tone and setting.  This isn’t the usual paranormal fare of tight-jeaned, tattoo flashing, sassy ‘insert flavour of the month paranormal here’ heroines.  No, Burn Mark is undeniably gritty, understated and British in the best sense of the word.

Powell is a YA writer but Burn Mark, by virtue of her skill, transcends that categorisation(in much the same way as Paolo Baccigalupi does), it’s simply a good story, an intriguing backdrop and a well paced adventure.

Burn Mark is set in an alternate history modern England.  Witches and witchcraft are real but the State registers and licences them, employing them in policing and espionage.  The British Inquisition is real too, although a somewhat tame and civilised version of its former self;at least on the surface.

Our protagonists are Glory- the streetwise chav who hopes and dreams of inheriting her mothers fae ability and Lucas Stearne - son of the Chief Prosecutor of the Inquisitorial Court.

Lucas and Glory become unlikely allies in a race to uncover who is behind the spate of witch kind terrorist attacks. There’s a turf war and a national conspiracy - plenty of well paced intrigue and action to keep you reading.

It’s akin to the Krays meets Spooks plus Witches.

After an initial dose of back-grounding, Powell manages to weave in world building and setting nicely.

She has constructed a believable alternate history of witches, from John Dee to the Second World War.  History seems to have pretty much worked out the same, the Allies won, Witches are still burned and killed in third world countries (actually that part’s not actually alternate history, more’s the pity). Witchkind are excepted into public life by virtue of liberal attitudes and government programs.

All in all we get a sprinkling of witch related events that makes for a nicely flavoured story, and sets up current tensions.

Glory, a chav is presented as a young woman with agency, she knows what she wants and isn’t going to end up being some gangster’s pram pusher. Staying true to that character she isn’t looking for a young, brooding, distant but ultimately redeemable lost soul of teen.  No she’s got priorities and finding a man isn’t one of them.

Lucas, too, has his vision of what he wants to be and despite the obstacles put in his way seems to roll resiliently with the punches.

On reflection, these strong characters  (the adults always seem less focussed or compromised) strongly push Burn Mark  as young adult tale. The teen protagonists and their actions direct the story.  Which isn’t to say that life’s realities are treated with kid gloves.  There’s witch burnings and murder, threats to kill and the well described “ducking” of suspected witches.

If you’re a fan of British crime or espionage drama I think you’ll enjoy this read and the rest that follow.