Total Recall – or We can remember it for you wholesale.

So I am reading Total Recall, the movie tie-in collection of Phillip K Dick’s short stories.  Included in that volume is the story that gave birth to that cheesy 90’s film Total Recall staring Mr Scwartznegger.

In case you haven’t seen it in a while: 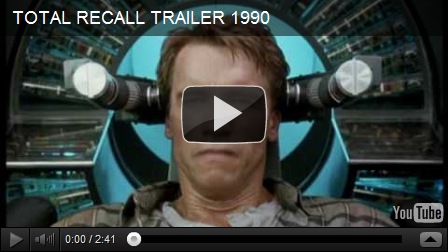 I watched it recently and it’s aged quite a bit, the cinematography and the special effects.  But I have a soft spot for Arnie.

I had never read the short story that inspired this movie.  It was, after all published in 1966.

It was interesting reading- a weird mix of futuristic ideas that don’t seem out too out of place in current sci-fi, some sexual objectification masquerading as edgy futuristic sexual freedom, and some downright funny juxtapositions like typewriters and handwritten cheques in a business that is manipulating/implanting memories and a world in which travel to Mars is regular.

We can remember it for you wholesale was nominated for a Nebula, but I find it a fairly ordinary piece of writing stylistically and the ending, well …hokey/trite ?

This year sees the release of a redux of Total Recall, which I suspect might be closer to the original story in its execution.  I haven’t seen it but Grant and Sonya at Bad Film diaries have and they offer a review here.

Out of the 1990’s version and the short story I still favour the Austrian juggernaut.