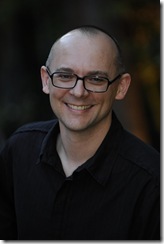 Only two previous life memberships have been awarded.  It’s great to see Sean recognised for his work and support of the the South Australian Writing scene.

Sean Williams is a New York Times best selling novelist with 35 Award winning novels and 75 short stories to his name.

He’s most widely known internationally for his work on the Star Wars franchise but has a written a slew of original science fiction works.

You can check out Sean and his work over at his blog.