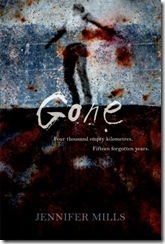 A young man is released from a Sydney prison, his hands empty, his identity gone. He catches a southbound train out of town, then hitchhikes west. He hasn't been home for fifteen years.

I have been delighted by Mills writing since I bought a chap book of her poetry, Treading Earth.  Large parts of Gone remind me very much the writing contained within that collection, particularly her observations of the minutiae of human interaction.

Another spill over from her poetry are the raw observations that are both economical and evocative.

Gone is both a road trip and a mystery. The road trip is an examination of an Australia that most readers, I would argue, are not used used to reading about.

The route is one generally only frequented by those that live in the major regional centres along the Stuart highway, the odd combi-van hiring tourist, selected grey nomads and truck drivers. It’s sparsely populated, vegetated and for the most part bone dry - the real Australia for a lot of people.
It’s refreshing then to have a narrative of Australia that isn’t “Kings in Grass Castles” or some faux bohemian, inner city “Secret Life of Us” story – important though each of these is.

Equally refreshing is the landscape and interactions viewed through the eyes Frank, a member of two underclasses; the ex-con and the sufferer of  a mental illness.

Frank as an invisible and fragmented observer presents the reader with a largely non judgemental picture of the land and its people and allows Mills to present the route and the characters as free from judgement as possible (hers at least).  The reader is left to make the judgement and come to their own conclusions.

Mills has written for left leaning publications like New Matilda before and there’s always a danger that when you have a character representative of a social underclass that some of those views might bleed through into the characters voice.  Not so with Frank, his fractured psyche doesn’t really allow that sort of coherent thought to be put into his mouth, he’s got his hands full working out who he is and where  he’s going.  There’s mentions of topical issues, like mining, but these are in the form of dialogue spoken by those who give Frank a lift and they come across as honest and genuine.

Similar to the observations of landscape, the reconstruction of Frank’s past requires a fair bit of effort from the reader.  Mills is deliberately ambiguous with his fragmented remembering's, which works well with the presentation of Frank as someone who is suffering a severe mental illness.  The reader is drawn in to trying to figure out what Frank’s done or is doing.  It’s hard to like him in that sense, I never really felt totally at peace with him, could never entirely trust the character.  I have sympathy up to a point but that sympathy is tempered by an uneasiness as to what Frank might be capable of or have done.

Gone is not a book that I think you can fall in love with nor a book that you can sit down and enjoy as a light piece of reading.  It requires some effort and careful reading (some of it between the lines) particularly when it comes to piecing Frank’s life together.  I enjoyed the observations of and interactions with, the people who Frank comes into contact with on “The Track”.

Some may be unsatisfied with the ambiguity surrounding Frank’s life but I think it’s the only honest way to portray the character.  There were some humorous instances and there were some eerily suspenseful and gut wrenching revelations.

I can heartily recommend it for tight and evocative prose, for an honest representation of an ex-con and someone suffering a severe mental illness.

If you are looking for a unique Australian narrative Gone is it.

Disclaimer: The book was provided by the author at no cost