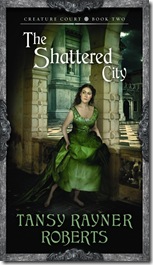 The Shattered City is book 2 of Tansy Rayner Roberts’ Creature Court Trilogy following on from Power and Majesty. The third and final book Reign of Beasts is to be released February 2nd1.

Don’t let the cover fool you- the Red Hot Chilli Peppers fifth album, Blood, Sugar, Sex, Magic could have been an alternative title for this book.
Bloody action, liberal use of Animor (magic) and some very saucy sex scenes and the sugar…well there’s honey cakes.

In my review of Power and Majesty I stated that I felt that Roberts had written a well balanced story with all of the above ingredients – I feel that she’s “one-upped” herself with the second installment of the series.

The Story
When we left Velody in Power and Majesty she was coming to terms with her position as the head of the Creature Court and had vanquished Lord Dhynar a rogue member. At the beginning of The Shattered City we are still not sure why the sky falls some nights nor what the big picture is, though there is a hint of malevolent intelligence behind it all.

Velody is firmly cemented as the leader of the court, though some lords still test her, forcing her to apply some muscle.  A series of murders threatens to throw all her good work into disarray, as it appears that  member of the court is targeting their fellows.  Compounding this is the break down in the rituals of the daylight world which help sustain and rebuild the city after each skybattle.

Ashiol is haunted by hallucinations of Garnet and he begins to fall into madness.  Rhian, a largely secondary character in Power and Majesty comes to the fore and reveals a secret.  Delphine is dragged reluctantly towards becoming a Sentinel and Velody will have to make a sacrifice to save her city.

Visceral
Visceral is perhaps the best way to describe this book.  It’s fantasy with a distinct mythic flavouring.  The Creature Court, not surprisingly reminds me of Greek and Roman gods, decidedly human in their ambitions and passions.  So on the one hand I get a sense of the fantastical, the changing of the court members into their various totemic animals or their larger Chimera form but on the other the politics and passions are very human.

Things to like
I am finding it hard not to keep referring back to Power and Majesty, which I found to  present an original characters, setting and story.  The Shattered City continues this pattern – Velody’s occupation as a dressmaker continues to play an important part in the actions and outcomes in the story.

How often in Fantasy does the heroine drop what she is doing to become a <insert weapon here> wielding Valkyrie? How refreshing is it that Velody holds on to her daylight work as a way of keeping her grounded.

In Power and Majesty Rhian was in danger of falling prey to the trope of “female character who has been raped” which explains why they are either tough angry women or skittish wall flowers.  I will say nothing more than Roberts has turned this trope on its head.

Finlay I love the way Roberts lets the reader think at least for a brief moment that Velody has everything under control before sweeping the rug out from under our feet and revealing the depths to which some betrayals go. Never turn your back on the Creature Court even in a world ending crisis.

Summary
Action, blood and lust and a little bit of dressmaking.  If you enjoy well written action, political intrigue, anime like transformation of characters into monstrous beasts and well written sex scenes give the whole series a go.

1. If you are lucky enough to live in Hobart, Tansy is holding a book launch, details to be found here