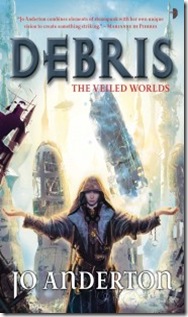 Someone is doing a damn fine job at Angry Robot in picking up talented authors.  Debris is Jo Anderton’s debut novel, though you wouldn’t know it on a reading of Debris.

Jo blends genres with the skill of someone who has more than one novel under their wing.

In a far future where technology is all but indistinguishable from magic, Tanyana is one of the elite.
She can control pions, the building blocks of matter, shaping them into new forms using ritual gestures and techniques. The rewards are great, and she is one of most highly regarded people in the city. But that was before the “accident”.
Stripped of her powers, bound inside a bizarre powersuit, she finds herself cast down to the very lowest level of society. Powerless, penniless and scarred, Tanyana must adjust to a new life collecting “debris”, the stuff left behind by pions. But as she tries to find who has done all of this to her, she also starts to realize that debris is more important than anyone could guess. [source: Angry Robot]

Like Jamieson’s Roil, Debris is a book that avoids being easily categorised.  Angry Robot calls it Science Fantasy and  files it under Science Fiction. I am at a loss to come up with anything more definitive or more accurate than that.

The world building is infused with a number of influences that create a unique and coherent world.  The naming of the characters has an Eastern European or Russian flavour, this combined with the symbol of the bear, the ever watchful “puppet men”, the cold and the references to the old city gave me a strong post glasnost/ final fantasy feel.

The magic system, while definitely fantastical is presented in such away that it feels very much like a technology, the result of a revolution like the Industrial.  Pion’s to me, don’t seem to be a mystical force, more like sub atomic particles.  It feels perhaps like magic but with modern technical sensibility or perspective placed upon it.

The wonderful world building aside, the core of this novel is the unravelling of a mystery and a search for justice'- there’s adventure, some explicit romance but ultimately Anderton hooks us in and tantalises us with mysteries both central to the plot and tangential.

Tanyana is a strong character and Anderton has done a wonderful job of pointing her in harms way without resorting to clichéd fantasy tropes. There’s no rampaging orcs, or evil outsiders.  Indeed there’s a small element of distrust in the powers that be, the powers that are supposed to look after the people of the city of Movoc-under-Keeper.

It’s worth noting that Debris written in the first person, which can be a difficult perspective to pull off for experienced authors.  Anderton has done it well, all the more so for it being her first outing. This point of view created an intimacy that drew me in as a reader, that and the fall from grace and resurrection made her readily identifiable and familiar.

For all its brilliance I felt the ending was a little toned down. A side effect  of Anderton’s wonderful world building.  I was expecting more revelations perhaps. This is a small disappointment though and I would heartily recommend it to lovers of science fiction and fantasy.

It falls into that category of wonderful books that play successfully with different genres in interesting ways.
You’ll enjoy it if you like Roil, The Alloy of Law or Burn Bright.

It is both gritty and fantastical. I can’t wait for Suited (book two) in the middle of the year.