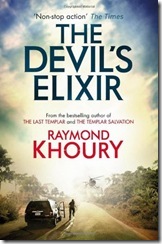 The Devil's Elixir features characters from Khoury’s previous novels but it works effectively as a stand alone.

Not having read Khoury before I had no idea what to expect.  Prior to chapter one he quotes both Carl Sagan1 :


There is a lurking fear that some things are 'not meant' to be known, that some inquiries are too dangerous for human being to make.

and Dr Harold Lief  commenting on the life and work of Dr Ian Stevenson2:


Either he is making a colossal mistake, or he will be known as 'the Galileo of the 20th century'

These quotes become important towards the end of the novel.

The Story
We begin with the discovery of a rare hallucinogenic drug by a Spanish Jesuit, Eusebio, a  missionary in Mexico in the 1700’s. We are, however, the  shunted forward in a quick succession of three scenes leading up to the present; FBI agent Sean Reilly in a mission gone to hell, then a Federal agent intent on revenge, and finally to a murder.

A crazed and previously thought dead Mexican drug baron is set on rediscovering Eusebio’s drug and synthesizing it.  He is known as El Brujo, the sorcerer, a believer in magic and the ability of substances to facilitate  travel between the real and the spiritual, between fantasy and reality, future and past. He’s unhinged, intelligent an intent on getting what he wants whatever the cost.
Reilly and a cross departmental team have to figure out what El Brujo’s up to and stop him before the drug can flood the streets.

Non-stop action
The book is, as the Times says, “non-stop action”. The reader is rarely given the chance to stop and reflect on who is behind what, or to put the pieces together, or so it was for me until we hit the point at which the possibility of reincarnation enters the story.

So impassioned is Khoury’s presentation the character of Prof. Dean Stephenson3 that I feared that this was the author’s voice coming though.  I actually contemplated putting the book down, concerned that I had read three quarters of a thriller only to find it a veiled argument for pseudoscience4 .

Now you may well say what’s the issue, it’s fiction?  I say it’s all in the expectation you help build with the reader.  I can easily read and enjoy a tale in which the characters consort with ghosts and vampires because that expectation is set up from the start.  Khoury had me a little confused and a little worried.

I won’t spoil the ending, continue reading until the end, Khoury redeems himself, but the implementation of the reincarnation facet of the story was a road bump in an otherwise fast paced enjoyment.

Characters with enough meat
Khoury’s been accused of having bland one dimensional characters in some of his other books.  I found his characterisation more than ample for a thriller.

I appreciated that the main protagonist wasn’t superman.  Reilly is trained, capable but human.  This portrayal helped ground the book as a realistic thriller, making the Reincarnation angle all the more glaring.

The female support character, Tess Chaykin, is bright, educated, resourceful, and a single mother.  Jules, a secondary character and female agent gets a decent action sequence in addition to outwitting the enemy through smarts.  The Devil's Elixir would fail the Bechdel test but there’s no warning sirens when it comes to other more glaring gender issues.

Reilly as indicated above, is no superman and his motivations are realistic.  Khoury introduces tension and motivation with the resurfacing of a past relationship and an unexpected surprise.
So I find the claims of flat characterisation unfounded.

Not for the squeamish
Aside from the slight road bump caused more by my own personal tastes, it’s a good thriller, with engaging characters.  It does involve Mexican drug lords with a penchant for creative torture though. You are forewarned.

1. Noted scientist and skeptic who wrote on developing a good baloney detection kit amongst other more impressive achievements↩
2. Stevenson carried out rigorous and systematic research into reincarnation.  He is criticised for his methodology and the evidence gathered ↩
3. Remarkably similar to Dr Ian Stevenson the quoted researcher above↩
4. For those readers interested in the work of Dr Stevenson, see here↩