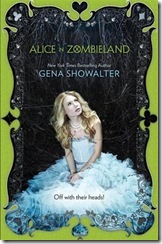 You might be mistaken for thinking that Alice in Zombieland is another of those faddish hacks of copyright free classic literature.  You’ll be relived to know its not.

While it does tip its hat several times to the classic, it is very much its own tale. Alice in Zombieland is an “action and romance lite” book aimed at the teen market and chiefly the female portion of it.

While clearly not being the target market for Harlequin Teen, being closer to 40 than to 15 and male, I didn’t find it a chore to read.


Had anyone told Alice Bell that her entire life would change course between one heartbeat and the next, she would have laughed. From blissful to tragic, innocent to ruined? Please. But that's all it took.

One heartbeat. A blink, a breath, a second, and everything she knew and loved was gone. Her father was right. The monsters are real.


To avenge her family, Ali must learn to fight the undead. To survive, she must learn to trust the baddest of the bad boys, Cole Holland. But Cole has secrets of his own, and if Ali isn't careful, those secrets might just prove to be more dangerous than the zombies.

Considering it’s written in first person, from the point of view of a 16 year girl, Showalter’s done an excellent job of varying action and introspection, dialogue and description.  At no time did I feel trapped inside the head of the most boring teen on earth.

I have described it as “action lite”, for aside from one particular scene, the action and the violence lacks a sense of verisimilitude. I never get a sense of horror, visceral or emotional.  To be fair, it’s a teen novel and I think this is a deliberate choice by Showalter.

The romance is tame too, a little sexual tension, a lot of heavy breathing and petting and a definite suggestion that teens should be “safe” when exploring their sexuality in both the physical and emotional sense.

I found the Zombies and their raison d'être a little weak and two dimensional for my tastes - being that of an experienced speculative fiction reader.  For your average teen just looking for a hero to smack down some <insert evil monster here> and experience some vicarious romance it’s quite good.  Think Buffy the Vampire slayer as opposed to Dracula.

Alice Bell our protagonist, is strong and forthright, but still occasionally vulnerable.  I get a sense of a well rounded teen and a good role model.  She’s young woman who is prepared to challenge the male lead in the story.

I’d recommend Alice in Zombieland for the 13 to 16 age bracket.  It’s not that sort of young adult book that will have the depth that older, more experienced readers are looking for.

This ARC was provided to me at no cost by the publisher.

Released in paperback in October 2012
Did you enjoy this review? Would you like to read more? You can subscribe to the blog through a reader,by Email or Follow me on twitter.
Posted by Sean Wright at 6:43 PM