The Ark by Annabel Smith 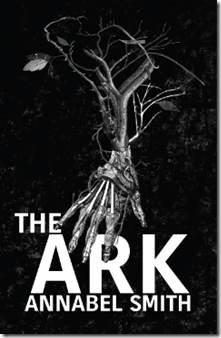 The book is only the beginning.  But I’ll start there since this is a review.

The Ark presents a form of fiction that while not rare, is perhaps underutilised. I am talking about epistolary fiction, fiction told through letters or documents.  There are examples of the form stretching back six hundred odd years and smattered over all kinds of genre but if you were looking to write a novel it’s not the form I’d immediately choose.

I think it’s a form that battles against the audience’s expectations and experience. It demands quite a clever bit of structuring from the author and  the nature of its communication - essentially stop-start, (a document is experienced as a complete thing in and of itself and has to be written as such to attain verisimilitude) has the potential to break the readers flow.

Essentially it has to look and read like the real thing while delivering the same level entertainment expected of structurally easier formats.

I am, however, glad that Smith took up the challenge.  The Ark is a fairly big diversion from the work she’s previously published and I think she’s done well, very well.

In terms of story she delivers an interesting and timely scenario:

The year is 2041. As rapidly dwindling oil supplies wreak havoc worldwide a team of scientists and their families abandon their homes and retreat into a bunker known as The Ark, alongside five billion plant seeds that hold the key to the future of life on Earth. But The Ark’s sanctuary comes at a price.
When their charismatic leader’s hidden agenda is revealed it becomes impossible to know who to trust. Those locked out of The Ark become increasingly desperate to enter, while those within begin to yearn for escape.

It reads like an eco/survivor-thriller and it is.  The challenges presented by the form don’t seem to have hampered delivering a tense ending. The beginning is perhaps slower than your normal thriller but this is necessary to build the tension and get the reader reading between the lines.

One of the advantages of the form is that we, the reader, have different perspectives presented to us.  We begin to create one perception of the book’s reality based on the narrative explored in one set of emails, only to have that impacted or even undermined by revelations in other communications.  The reader is caught in a game trying to decide which character is presenting the most accurate state of affairs.  In that sense it’s perhaps more akin to a murder mystery thriller but without Hercule or Miss Marple to hold our hands.

So narratively,  The Ark worked very well for me.  The production of the book, raised the bar further.  If you are going to set a story in 2041 that occurs in cyberspace, then aside from say… presenting the story as an App (which Smith also did) you have to give the reader some small sense that they are not reading a book, you have to transcend the book to some extent.

I did read my version in ebook form (I'm not sure if there is a paperback) which does a great job normally of simulating a standard paperback.  To break down that sense that we were reading a book though, Smith has designed the documents we read to appear as emails (ie not just text with address headers), blogposts, newspaper extracts, etc. Aside from verisimilitude it generates, this choice gives a literal change of scenery.

To have left the project there, would have been fine.  A nice terse future thriller, that makes some quiet comment on ecological issues and presents the reader with some variety in their narrative consumption.

Smith went further giving us an expanded interactive multimedia experience and for that you can checkout thearkbook.com yourself.