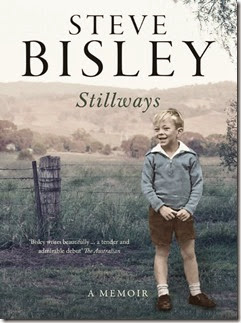 I happened upon Stillways while lending support at a local gallery and craft shop. Steve Bisley is one of those iconic Australian actors, never perhaps appearing on the big screen internationally (except in Mad Max), but almost always there in supporting roles.  He’s much like Bryan Brown in that respect.  I have a fondness for the roles he’s played and his presence on air has been part of my cultural experience growing up.

Stillways  captured my attention and dragged me away from other more pressing reading work.  I am not a hug fan of memoirs, I have read about 3 in my lifetime, but I couldn’t stop reading.  There’s an honesty and earthiness in this book, humour and dark secrets.  And love, love that hits you square in the eyes in the final pages. I didn’t have cash with me to buy the book but was able to pick it up online.

The opening chapters read like prose poetry and had me wondering where Bisley had been hiding this talent.  There’s a palpable love of the physically environment of Stillways and Bisley’s descriptions bring the place alive in words.

The soaking wind curves around the channel that empties Lake Macquarie into the Pacific Ocean. It blows across Pulbah Island and reaches to the sodden south. There is no rain, but a thin wetness. There is no whisper through the casuarinas brought by other winds; they are bowed and heavy now and all things feel sunk and riven.

or indeed the troubled relation ship with his father:

Our sticks of choice are in our hands.

We have chosen carefully.

Too thin means they’ll break too early and the fury will continue with a belt or worse.

Too thick and the welts will be raw and deep.

There is a crunch outside and then another, measured and quickening.

My eyes go to my sister; her legs are buckling in preparation for the blows, her stout stick is quivering in her hand.

Then he is at the door.

Then inside with us.

His face is ruddy, white spittle blisters his lips and he is shaking and furious. He wrenches the stick from my sister’s hand and cuts a great whistling arc with it. Again and again the stick flails against her till she is screaming and pleading. ‘I’ll be good, Dad!’ she cries, and, ‘No, Dad, no! Please, no!’

It only covers Bisley’s life to age 15 ( I suspect another volume) but there’s more than enough of a life revealed in those pages to feel as though you’ve got value as a reader. Bisley comes across almost as a stereotypical larrikin. I think this book reveals that side of him that we see surface in many of his roles but there is also greater depth here.  If he appears a stereotypical rough talking, straight shooting Aussie, it’s because that’s his background.

Grab a copy while we are waiting for the next fabricated celebrity star to fall and fade.  Bisley’s life is  interesting and colourful, perhaps more so than many of the roles we have come to love him for.