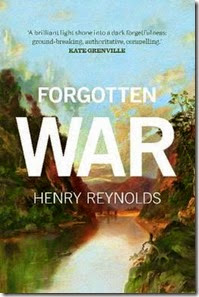 I read Anzac’s Long Shadow earlier in the year and found it to be a critical and refreshing look at aspects of Australia’s military history and the detrimental or skewing effect that our martial myths have on both our soldiers and the collective consciousness and culture of the Australian people.

Forgotten War is similarly a book that looks at our forgotten war(s) (the only ones fought on Australian soil for control of it) and our cultural amnesia in relation to it.  If I can crudely sum up an Australian’s sense of history it might go something like this.  Captain cook landed, settler’s and convicts arrived, there was isolated problems with the indigenous population but on the whole Australia is a peaceful nation of beer drinking sportsmen and women, that’s never known war on its own soil.

Forgotten War outlines succinctly and accurately that colonisation was not a largely peaceful process and that for a good 140 odd years settlers fought a series of conflicts for control of the continent and Australia’s aboriginal inhabitants resisted, forcefully and with some early successes until numbers, technology and the bushcraft of the colonisers improved.

White Australia has a problem with its acceptance of this history. It’s a curious situation.  I can understand the racist impetus to obliterate the Aboriginal side of this history. What could be worse than defeat?  Why, enforcing the view that you never really fought to defend your land anyway.  In doing so, however, we bury the history of white settlement and of white settlers, neglect the harsh realities they had to face, the conflict they fought.

This situation is as ridiculous as suppressing the reality of the Indian Wars in American history.

Reynolds has produced very accessible text, you needn’t be a history nut to enjoy this.  Indeed it helps open up that era of colonial settlement, and give it some balance.  You’ll understand why settlers living on the frontier walked to the wash house or barn fully armed and in twos.  Not because they harboured some unrealistic notion of the danger posed by Aboriginal warriors but because they had first hand experience of an ongoing conflict and a skilled and fast moving enemy.

Reynolds opens with an overview and lays out several points for consideration.  At what point did the narrative change from frontier war into something else? Can we call it a war?  What kind of war was it?  What were the costs of conflict in property, livestock and human lives (at 6000 settlers and 30,000+ Aboriginal dead it’s our countries third largest loss of life due to conflict).  Was a genocide carried out?

This book should get you thinking about why (when military historians regard the resistance as a conflict) we don’t honour the settlers nor the early aboriginal warriors in our military myth through the War Memorial, why we don’t teach the history of early conflict when it’s there in black and white print from the pages of almost any colonial newspaper. The only answer I can come up with is that it doesn’t fit some very deep seated and erroneous concepts of self, Australians have.

This book caused me to reflect upon my country’s singular reverence for its war dead.  Our Cult of Remembrance outstrips even religion in terms of what is sacrosanct.  Australians will rarely allow Diggers to be slighted, or the rose filtered view of our ANZAC soldiers to be questioned.  Suggest that perhaps we should move on, tone down the focus and you’d be tarred and feathered.

Yet I could find any number of folks who would not bat an eyelid at suggesting that Aboriginal people should forget the past – forget a conflict of 140 years, the deaths and the associated social and cultural costs.

This is a book every Australian should read if they want to be honest with themselves about the beginnings of our recorded history.