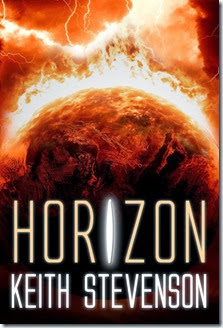 Keith Stevenson’s Horizon was released through HarperCollins’ digital imprint in November.  Keith’s been a stalwart of the Australian speculative fiction scene for many a year, mainly in his editor/publisher role at Coeur de lion publishing. So it’s good to see him surface with this product from one of the majors.

Horizon is Keith’s debut novel.  How has he fared, stepping away from short fiction and editing/publishing the longer works of others?

In my reading at least, I have perceived a tendency for science fiction novels to move toward the centre in terms of combining narrative and the science of science fiction i.e. we move toward what is scientifically plausible (with some subtle handwavium) and the story centres on character.

I am thinking of James SA Corey’s works and closer to home, Patty Jansen. Space is generally a hostile place that puts characters under stress in extreme isolation. It’s fertile ground for human foibles to be pressured and exposed, for conflict to arise.

So that’s the approach Keith has taken with Horizon.

The exploration vessel Magellan has been sent on a 34 light year trip to the Iota Persei system to explore the distant earth like planet,Horizon.  Staffed by a multinational crew it should be a testament to humanity’s ability to pull together in a crisis. Tensions between nations, however, play out between crew members even before they begin the Deepsleep (a half century of life suspension)  portion of the mission.  On waking, Commander Cait Dyson discovers her 2IC dead and their course changed. What was a bold mission into the unknown becomes a tense novel of suspense and second guessing.  Can they trust each other, the ships AI, the half human half digital intelligence Bren?  But most of all can they trust that the situation on Earth hasn’t changed in the 55 years they have been asleep?

Keith combines that sense of wonder we get from the extrapolation and explanation of big ideas (don’t worry, there’s no calculus) with tense mystery and suspense.  There’s competing personalities and agendas, some social and ecological commentary.  It proved to be a edge of the seat experience for much of my read.

Horizon’s strengths were in the presentation of the story world, the explanation of the workings of Magellan and the tense interplay between characters. I didn’t feel quite as convinced by the socio-cultural representation of Earth.  Certainly there was nothing that derailed the story but I felt at times that Keith had done such a great job at other elements that the background for the political and cultural situation on Earth didn’t quite have the same depth.

If you are hankering for some science fiction that makes sense and a tension building read, buy it. Good entertainment doesn’t usually come this cheap.

This copy was provided by the author.