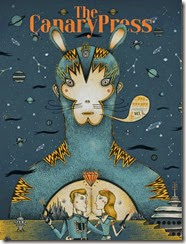 Long time readers of the blog may remember that I gave The Canary Press “a bit of stick” for the way they went about announcing they were going to do a Genre issue. Their approach ruffled a few feathers and they gave an apology to the community (read it here). The best thing they have done though, is produce a good issue.

Issue 6 is the Genre issue.  Leaving aside discussions on genre versus literary divisions and whether they do or should exist.  It’s quite an ask to produce something that covers all genre. An impossible task really, before you even get to various arbitrary subgenre breakdowns (sadly there’s no Werewolf romance, nor Austen/Cthulu mash-ups).

So the Canaries didn’t do that, instead, as outlined in a rather creative editorial that had me laughing ( a good sign), they realised their limitations and just went for some quality genre fiction, providing some oxygen to writing that perhaps goes unnoticed.

Now you may say unnoticed by whom, and that’s a fair question.  I see this issue as bridging a gap between genre camps (where Literature is a genre) or at least between loosely defined communities.  Most of the folks in the speculative fiction community will for instance recognise the writers outlined below, living or dead, international or local.  So I see this issue as a good way of drawing readers from genre camps into The Canary Press readership while also expanding the reading experience of those who might favour the Lit. scene and already be on board.

What we do get though, is probably slanted more to the speculative fiction reader.  There’s a couple of classics; Stanislaw Lem’s, The Fifth Sally (A) or Trurl’s Prescription and JG Ballard’s (this holds up very well) The Intensive Care Unit. Kaaron Warren produces some science fiction social commentary in the form of Witnessing and some creepy crime flash surfaces from Lee Battersby in, A Suitable Level of Reward.

Kij Johnson’s 26 Monkey’s Also the Abyss might even introduce some Australian speculative fiction readers to one of America’s best current short story writers. There’s some gangster infused, Australian flavoured, modern hardboiled with All the Ropes Had Blood on Them from Paul Mitchell and a rather surreal story of Unicorn surgery in Unicorn Surgeon from Issac Mitchell-Frey.

I did find that most of the fiction was tending toward the cerebral. I feel that we are presented with writing that goes beyond just telling an entertaining story.  We are presented with ideas and narrative structure that are a little out of the ordinary and consequently we have an opportunity to engage in the fiction in a different way.  Kaaron Warren’s story certainly feels like she’s experimented stylistically (successfully I might add) and the Kij Johnson is broken up into 24 numbered paragraphs that jump around the narrative to good effect. Lem’s work feels very 70’s beat poetry in the way it mixes rhyming prose and a dig at the awful power of bureaucracy and Ballard’s work with some subtle technological changes could still be relevant as a criticism of online culture and the disconnect networked devices bring us.

Presentation  though, is where a paper product can push some advantage and having had my ereader die on me this week I can really appreciate something I can hold in my hand, that doesn’t need powering up or recharging.  The Canary Press prints on a sepia toned matt paper (for this issue at least) and it has the feel and look of quality recycled paper.  There’s a mix of colour and black & white interior art and overall I get the feeling some care has been taken in producing a unique product for the genre issue.

The Canary Press has sourced some diverse and international work to grace the pages and their choices give the journal a distinct feel, my only complaint here is, where’s Kathleen Jennings! Seriously though, there’s some distinctive artwork (that can be purchased through their store) that marks the magazine as a little bit arty and special.  Think more Shaun Tan than Borris Vallejo.

At $40 a year for a subscription( 4 issues per year) I think it’s good value.  As a single issue I think it’s worth picking up for the variety of Speculative Fiction alone.

Issue 6 was provided free by The Canary Press