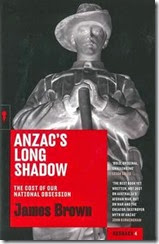 I read this book in the space of 2-3 hours.  It was equally; compelling, comforting and unnerving.

James Brown articulates the concerns that I have had for a long time with the growing Cult of Remembrance, with the commercialisation of the day, with the growing stature of the myth that none dare question.  You can mock a person’s religion quite easily and without too much fuss, but say anything about Anzac Day and your likely to be  un-Australianed out of town.

I was sagely nodding my head in the early chapters and then Brown began to outline the costs of our uncritical veneration of the myth, on both our living soldiers and on our future capacity to maintain security. It was a chilling read even for one such as myself who views much of our modern “celebration” of Anzac day with a cynical eye.

This book is about how the myth has shaped us as a nation, how that myth might not actually be the best thing (at least in its current trappings) for our armed forces now as they return from service, nor into the future as our region experiences growing tensions.

I think possibly every Australian should read this book - certainly before we hold our centenary next year, and students studying the first world war should certainly read excerpts from it.

Anzac’s Long Shadow is an opening salvo in a conversation that Australians need to have with themselves about Anzac Day and our interaction with the military as it is now.

The prologue sets the scene for how divorced civilian and I daresay political Australia has become from the reality of modern conflict.  It seems as if our ideas of war can be summed up by the movies Breaker Morant or Gallipoli and Eric Bogle’s, The Band Played Waltzing Matilda or Redgum’s I Was Only 19.

Anzac’s Long Shadow puts forward the convincing notion that as a nation we are divorced from the reality of modern warfare.  That our concept of what a soldier is and does, is what they did at Gallipoli.

Companies take advantage of this myth to sell all manner of products, vast sums are spent on venerating long dead soldiers while many live veterans struggle for appropriate services (support for female veterans one of many issues not handled well  by the military nor indeed long running community associations).  Much of our charity sector that focuses on veterans needs an overhaul and we know next to nothing about our past decade’s worth of involvement in world conflicts. Our politicians of any stripe (bar a couple) aren’t shown in too flattering a light either – disinterested to the point of negligence or blinded by veneration.

But lest you think this is an ex-serviceman come to settle some scores, Brown’s critical eye falls on the armed services and it’s not pretty.  He paints a picture of a service( an underfunded one) that seems to have issues gathering and storing information on itself e.g. relatively simple statistics on how many people served in Afghanistan were hard to come by. A service that falls short in assessing performance and suitability for leadership. A service that has never generated an amphibious landing manual, that doesn’t teach the mistakes made at Gallipoli (unlike the US army that used the Gallipoli debacle to inform their own operations in the 30’s which led to successful campaigns in the pacific). A service that perhaps believes in the myth itself too much.

Ultimately though, you can read the deep respect Brown has for his fellow servicemen and women.  This book is an early warning bell.  It’s a book that says we need to wake up, pay tribute to the past certainly but ensure we are a capable and secure nation heading into what is likely to be a time of continued turbulence.  We need to understand that there will most likely always be Australians at war or in theatres of conflict.  That we need to understand what these Australian’s are doing and why it’s important.  That we need to become critically engaged and involved with our military services, to laud their efforts and be informed critics of their failings.

The book can be purchased at all good bookstores or online at Booktopia.