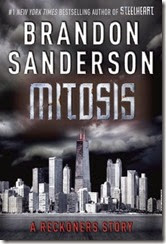 Sub-headed as a novella on my copy, Mitosis, stretches the definition of the term.  This beautifully produced hardback contains the title story, some illustrated character dossiers and a chapter from the upcoming sequel to Steelheart, the January release, Firefight.

The story follows our protagonist David Charleston, a Reckoner as he walks the streets of the now freed Newcargo (Chicago of a future besieged by corrupted humans with superpowers).  He and his group of normal humans have defeated the tyrant Steelheart and life seems to be returning to something nearing normality.  Refugees are returning to the city, now free from the corrupt Epics (evil super powered humans).  There is hope.  That is until disgruntled Epics, start seeking out the human that killed Steelheart.

To be honest with you, Mitosis is really a long short story, indeed many of the short works I have been reading for the Aurealis Awards are longer.  The title story comes in at around 44 pages of large text.  The story is however smoothly written and action packed, working well as an introduction to the larger series for newcomers, like myself and drip feeding diehard fans with more of what they love.

I did feel compelled to go and read the start of the series.  So I tips my hat to Mr Sanderson. I did find some of David’s mannerisms…”like” annoying, but he grows on you after awhile.  The concept of super powered mutants is hardly original but Sanderson manages to somehow infuse it with a neo-western feel (perhaps that’s just David’s mannerisms). I do like some of Sanderson’s writing and he seems to have a lighter touch here than he did in The Alloy of Law, which although I enjoyed, did almost feel at times like I was reading a role playing game sourcebook in relation to his outlining of the magic system.

I’d personally baulk at paying the full cover price for what is essentially a short story and some advertising for the next novel.  It is, however superbly written, with some wonderfully interior illustrations.  A great Christmas present for the fan, but as a first purchase I think the fantasy loving reader in your household would probably prefer that you start with Steelheart (or purchase it as well).  Once you get into the story you’ll want more of it.