Horizon Blog Tour - From the Ground Up: Building a Planet By Keith Stevenson

I’d like to thank Sean for giving over some space on his blog for the Horizon Blog Tour. 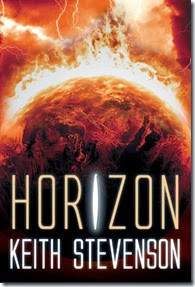 Horizon is my debut science fiction novel published by HarperVoyager Impulse. It’s an SF thriller centred on a deep space exploration mission that goes very wrong, with repercussions for the future of all life on Earth.

While the main focus of the story is the tense drama that plays out between the crew in the cramped confines of the ship, a lot of the grunt work in good science fiction goes into imagining the worlds that space travellers visit. The way I see it, there are four key elements in creating a believable world to serve the needs of the story:

To make sure my crew is sufficiently isolated from the rest of humanity — and cut off from any possible outside help — I needed a star that was quite a distance away. Iota Persei is a main sequence dwarf star 34.4 light years from Earth. The sun is slightly bigger than our own. Although no planets have been detected around it so far, that could change. Planetary discovery is a ‘boom industry’ at present, with the Kepler telescope alone responsible for discovering 978 confirmed planets and over 4,000 potential candidates in the five years since it launched.

Because my target planet Horizon is Earth-like, I imagined a ‘typical’ system with seven planets, including Iota Persei F, a gas giant twice the size of Jupiter, which the ship briefly orbits.

Here’s a description of that close meeting:

Space closed in all around, stars piercing the darkness as the leviathan to port threatened to swamp her senses. It seemed much too close.

Microlasers tracked eye movement and the helmet induced a slew of orbital data directly onto her optic nerve, overlaying the information on the roiling clouds of Iota Persei F. She blinked it away, preferring to focus on the swiftly moving bands of cloud, watching tendrils weave and curl around each other where they met, like smoke from an incense stick. The colours were striking: emerald greens, oranges, electric blues, all interspersed with fingers of white. Nothing like this existed in their backwater solar system: twice as big as Jupiter and far more garish.

An ominous purple eye hoved into sight, a gigantic anticyclone standing proud of the surrounding cloud deck. It stirred up the bands where they touched, shredding them, sucking them into its vortex and scattering them back along its path to slowly reassemble and await the approach of the next storm.

The main prize in the system is the planet Horizon or, more correctly, Iota Persei B, which is second from the sun. As I wanted Horizon to be Earth-like, it had to possess similar physical properties to Earth, so it’s approximately Earth-sized. From that follows similar gravity and air pressure. It also meant positioning the planet in the ‘goldilocks zone’ — where it’s not too hot, not too cold, but j-u-u-u-st right — so it has suitable surface temperature variations as well. And like Earth — and indeed any other planet — Horizon also needed a geological history, a history that is written across the face it presents to the world:

Day was dawning over a wide, undulating plain. Purples, pinks and golds shifted across the sky and seemed to ripple in reflected glory across the land. The effect lasted only an instant and then the sun broke over the horizon, a diamond flash that arced across the sky, banishing the last of the shadow to reveal a desolate kind of beauty that stole Cait’s breath away. Even from a cruising altitude of one hundred metres, she could see that the ground was covered in a white aggregate, no doubt the source of the colourful dawn reflections. Spindly grasses pushed their way through the landscape, but apart from that the view was uninterrupted all the way to far-off low, rolling hills. The bot executed a turn and a river came into view, snaking into the middle distance. Its banks were covered with lush vegetation, which quickly gave way to sparse grasslands again.

In its far prehistory, Horizon was subject to massive glaciation — far more than Earth. In fact there was a point where the surface was all but entirely covered by a thick mantle of ice: a snowball planet. That type of pressure, and the abrading force of the glaciers, created undulating plains out of the previously thrusting mountain peaks, which are now scattered across the land as aggregate. The sparse plant life is another clue to the effects of that glaciation, with only the hardiest plants surviving the ice age and perhaps only now beginning to reassert their presence on the landscape. It’s an important element of the story that planetary environments are subject to massive change on a geological timescale, and what appears Earth-like (even our own Earth) was not necessarily as supportive of life in the past, and may indeed change again in the future through natural processes. Which brings us to climate, and as Magellan arrives, Horizon is certainly feeling the effects of a massive weather event:

He tapped the controls and the bot’s-eye view on the screen rolled as it dropped towards the storm.

‘There’s a lot of water vapour up here,’ Nadira said, almost to herself.

And then the bot entered the central column of the hypercane, accompanied by an eldritch flash that almost swamped the photosensors. Inside was darkness strobed with lightning that picked out patches of purple and green among the greys of the surrounding eye wall. Cait imagined how deafening the storm must be, even in the relative calm of its centre.

Placement, properties, history and current environment: shorthand for building a dynamic, changing world. One where the crew of Magellan are faced with a whole raft of problems.

5 November — Welcome to Magellan: Inside the Ship — Darkmatter http://www.darkmatterzine.com/

13 November — From the Ground Up: Building a Planet — Sean Wright’s blog http://bookonaut.blogspot.com.au/

Keith Stevenson is a science fiction author, editor, publisher and reviewer. His debut novel Horizon is available as an ebook via http://www.harpercollins.com.au/books/Horizon-Keith-Stevenson/?isbn=9781460704653

His blog is at http://keithstevensonwriter.blogspot.com.