Who is NA Sulway? 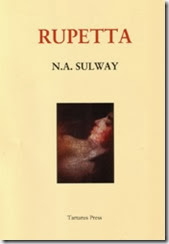 and why am I only hearing of her after she has won the Tiptree? The first Australian to win the Tiptree! Sometimes this hyper connected world has gaping cracks you can drive a road train through.

So who is NA Sulway?

Nike Sulway lives and writes in Queensland, Australia. She has also written as NA Bourke.  Writing as Bourke her novel The Bone Flute won the Queensland Premier’s Literary Award for Best Emerging Author in 2000.  It’s “Literature” and it came out 12 years ago so I give myself a little slack, I think I was coming off a long period of not reading much fiction at that time in my life.  But going by her publication stats she’s been reasonably active writing novels and short stories.  Check out her publications here.

So aside from being active writing she’s been reasonably active in writing community - co-director of Olvar Wood Writers Retreat since 2007, and one of the editors of Perilous Adventures literary magazine.

So how did I miss Sulway?  Your guess is as good as mine.  Happy that I have discovered her now though.

In February of 1991 at WisCon (the world’s only feminist-oriented science fiction convention), award-winning SF author Pat Murphy announced the creation of the James Tiptree, Jr. Award, an annual literary prize for science fiction or fantasy that expands or explores our understanding of gender. (To read her speech go to PatMurphy.pdf.) Pat created the award in collaboration with author Karen Joy Fowler. The aim of the award is not to look for work that falls into some narrow definition of political correctness, but rather to seek out work that is thought-provoking, imaginative, and perhaps even infuriating. The Tiptree Award is intended to reward those women and men who are bold enough to contemplate shifts and changes in gender roles, a fundamental aspect of any society. [source: Tiptree.org]

Four hundred years ago, in a small town in rural France, a young woman creates the future in the shape of Rupetta. Part mechanical, part human, Rupetta’s consciousness is tied to the women who wind her. In the years that follow she is bought and sold, borrowed, forgotten and revered. By the twentieth century, the Rupettan four-fold law rules everyone’s lives, but Rupetta—the immortal being on whose existence and history those laws are based—is the keeper of a secret that will tear apart the world her followers have built in her name.

Rupetta is published by Tartarus Press in limited edition hardback at around $65 or  between $5-6 for an ebook version.  Check out the Tartarus Website for details and links to reviews.