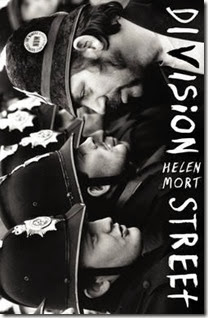 You know what sold me on this collection?  Not the fact that Carol Ann Duffy said that Mort was one of the “brightest stars in the sparkling new constellation of young British Poets”.  Not the visually appealing cover that hints at my politically left inclinations.  No, it was the poet herself reading Miss Heath (included in the collection and appended below). There’s a lesson in there for small publishers of poetry(and poets) I think.  Never underestimate that extra something a poem read in the poet’s voice can provide.

Still it was a risk spending $30 on someone I had only heard on Youtube.  A reader can be burned by cover blurbs, more so in communities that are small, where poets are friends and/or part of a movement or trend. That’s not to suggest nepotism or something like it; more the reality that familiarity can breed appreciation that might not extend to the wider public.

It was a risk worth the taking though.  I think I have discovered a poet who’s career I’d like to follow and whose work definitely gives me joy.

A lot of Australian poetry(certainly that collected in “Best Australian…” collections I have read), is devoid of rhyme, it can fell sparse and let’s face it despite my recent predilection for Japanese form poetry, give me a net of form, structure and rhyme to volley poems over any day.

I love cleverly executed rhyme and Mort has a deft touch. That’s not to say this book is chock full of rhyme, but the trend in poetry to avoid one of poetry’s main technical advantages over prose, has me feeling like it is when only 5 out of the 40 odd poems have rhyme included.

But I’ll dismount that particular hobby horse and talk about the collection.  Thematically it’s fair less political than the cover might lead you to believe. Indeed I am tempted to say its not really political at all.  This is very much a collection of poems about the poet and the effect of environment, history and people  on her life and experience.

The poem Division Street is about the break up, the division of a relationship and the near miss with an STD that might have prompted it.  Scab, the poem you’d think most likely to be political, is more historical and introspective.  It juxtaposes the mining strikes with Mort’s decision to take a place at Cambridge. The reader gets to explore divisions between strikers and police, between the establishment and the working classes between Mort and the culture she feels she betraying.

From now, your movement
is a kite’s: you have the sky
and yet you’re tethered
to a man below, an ancestor

who looks on silently
from an old print: your face
in his and his in yours.
Even when he yields the string,

he’s set your course. The breeze
may intervene, but you are lifted
by a finer thread, like all the living,
anchored by the dead.

Another way at looking at division as well, but perhaps also  an antidote to the feelings worked through in Scab.

It’s not all navel gazing though and I was struck by some of the descriptions of places important to Mort.  Shetland part of North of Everywhere has such a beautiful line in:

Wind-whittled, turned on the sea’s lathe too long,

the dead from Ambleside

The third last poem Broken Spectre ( again I sense another division, albeit an unwanted one) is intensely personal, a beautiful piece of the relationship between father and daughter and the loss of a shared activity that they both obviously enjoyed(climbing).  The loss of one person’s ability cushioned by the knowledge that they have imparted their knowledge and strength. The imagery and the sentiment had this one vying for favourite.

For your viewing pleasure:

You can purchase Division Street through Booktopia.  There is an ebook copy but this is the kind of book that you want a hardcopy of.