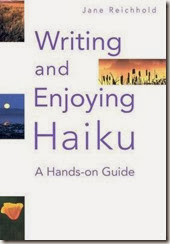 Up until a month ago my understanding of Haiku really didn’t reach much further than what I was taught in grade school some … an awful long time ago.  This changed when I decided to undertake some self education for the purpose of the Post-it Note Poetry event held every February by members of my writing group.  I was determined to learn a bit more about the form, surely it was not just 5-7-5 syllables .

It wasn’t, as it turns out.  There’s an ocean of information out there on how you can / “should” write Haiku.  Indeed I found myself getting distracted and lost, there’s just so much great material in the rabbit warren of early nineties Haiku pages to be had - freely posted for enthusiasts to read and experiment with.

Indeed I noted several articles that made their way in altered form into Writing and Enjoying Haiku.  What this book presents though, is a nice neat package with just the right amount of information to get you started and to not look terribly ignorant when unleashing your compact wisdom on the public.

Chapter one gives the reader an understanding of what a Haiku is, and how to go about reading and understanding them. There’s a backgrounder on the history and development of the form in both Japan and the rest of the world. It was here I think that I realised that while I may be able to read the works of Masters like Basho, without some deeper cultural understandings of  Japanese literature I will miss allusions and references.  Haiku can be every bit as dense, as deep, as Shakespeare.

Chapter two  on writing Haiku is worth the price of admission by itself.  Here Reichhold breaks down, with examples drawn from the masters, as well as current Haiku poets, the 24 techniques that you can employ in writing haiku. She also canvases the “rules” that can and have applied at different times and at the behest of certain schools or masters.  What I found particularly refreshing about Reichhold is her focus on technique and her relaxed and sensible approach to using them.  For some Haiku poets the experience of writing in the form takes on religious import and the rules become dogma rather than guidelines.  Reichhold’s approach is basically know the rules, when and when not to use them.  Having written somewhere in the vicinity of 5000 herself and having dedicated a decade to producing Basho - The Complete Haiku I am prepared to follow her lead.

Chapter three covers Haiku and the sharing and appreciation of your works and others, getting published and preserving your poems.

Chapter four begins delving into associated forms, such as Tanka, and Renga.  I found this section interesting but less relevant - only because I am still coming to grips with Haiku.  This chapter I plan to return to when I have a few more Haiku under my belt.

If you want to explore Haiku, if you want explicit teaching this is the book for you.  I’d heartily recommend it to any teacher attempting to teach the form in high school, because it will move you past the rather simplistic notions our school texts have about the form.