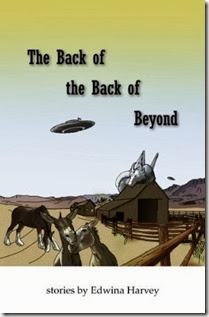 The Back of the Back of Beyond is a collection of linked stories by Edwina Harvey.  Beginning with the story No Pets Allowed it’s been a twenty year journey to get to this unique collection.  I say unique, because Edwina hasn’t written your run of the mill urban fantasy.  It’s a cross between the tone of Cyrano de Bergerac’s proto-science fiction and something like The Secret Life of Us, only with role-players instead of trendy 20-somethings living in Saint Kilda.

The stories trace the fantastical life of the author from living in share house to moving to the back of the back of beyond.

I think comedy is one of the hardest forms to attempt in any genre so how you will find Harvey’s work will depend on if you like fannish references and in-jokes, meshed with situational comedy and dry wit.

As an example of the type of gags your likely to encounter here’s the author recalling an incident with her flatmate Bean:

Something square had insinuated itself into my right nostril.

Ex-flatmate Dragon Warlord, Pig Hunter of the Fifth Dimension must have been napping as well. I heard him awaken with a start, coughing and spluttering indignantly because someone had caught him napping, no doubt a throwback to his days spent dozing through Uni lectures.

He bent, he gawked, he put a reassuring hand on my right shoulder and endeavoured to pull me away from the keyboard.

I squealed in pain, probably not unlike all those feral pigs in his game. And after all of the chocolate and Coke he’d been feeding me, I probably looked like one as well.

He got up close and personal with my keyboard. I could see him out of the corner of my eye, and I couldn’t help wondering if he intended to join me in an unholy state of nostril/keyboard union out of a misplaced sense of loyalty, or empathy, or sympathy … or anything else ending in ‘athy’, but no, he was merely studying my predicament.

“You’ve got the letter H stuck up your nose,” he observed unhelpfully.

It’s very light reading and could be devoured in one sitting or story by story.  The book was funded through selling guest appearances in the various stories,  the list of friends and supporters are listed, as well as which stories they appear in, at the end of the book. Some stalwarts of the Australian scene have been immortalised here.

I think this collection certainly has more value for those readers who have a prolonged attachment to science fiction and fantasy in the Australian scene, there will be some cross over with our geek tribes from the northern hemisphere, but the book has a definite antipodean flavour.

This book was a review copy.  You can purchase it through Peggy Bright Books.