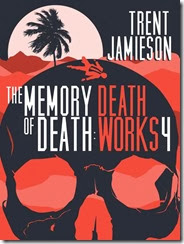 I was pleasantly surprised to find that Trent was able to bring Stephen de Selby back because, honestly I thought he was tragically and irrevocably gone in the Business of Death.  Such is the god-like power of authors.

So de Selby returns 20 months after his heroic demise (a surprise for someone who is Death incarnate) and your favourite schmuck is back minus the power of the Hungry Death, it having been redistributed back among the 13 Regional Managers.  It seems that everything is back to normal.  Mortmax Industries are back to pomping the newly dead, ensuring their safe passage to the other side. Lissa is the new Regional Manager and de Selby’s cousin is her 2IC.  Nothing could go wrong could it?

But this is Stephen de Selby, the poster boy for awkward wrongness.  He finds upon his return that Lissa’s moved on and for some reason the personnel at Mortmax don’t like him very much (unless he’s on the end of a boot).

The Memory of Death is clearly a departure from the story arc that was resolved in the first three books - our hero having risen as high as he could go has fallen a long way, we are back to the lovable, slightly dead schmuck that we all love.  The Memory of Death offers a new job and a new mystery for us to participate in. You could read the story fromthis point because Jamieson has done some fairly smooth backgrounding but I think the best way is to start with the first three books.

I will note that the Memory of Death is pretty much a novella at 97 pages(on Sony Reader software).  The writing is tight and smooth; fans will devour Jamieson’s action and wit in one sitting.  I was left reinvigorated and wanting more of Stephens awkward self deprecating blundering.

You can purchase Memory of Death from Momentum Books or from most reputable digital stores.

This book was provided by the Publisher.