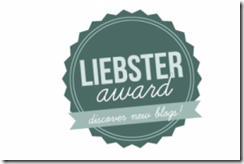 I was tagged by the wonderful writer Joyce Chng with the Liebster Award.  It’s been awhile since I have done one of these internet memes and Sunday Monday morning with the edge just coming off a migraine it seems about the right time.

So apparently the rules of this internet meme are 1) Tell readers and the NSA 11 details about myself, tag 11 people, and answer 11 ques­tions posed to me by Joyce

The Official Questions that I must answer

1.What is the one thing you regret most in life?

Not getting serious enough about writing sooner.

2.What is your Myers-Brigg per­son­al­ity type?

3.Name some­thing about your­self that you dislike.

My inner editor, the bastard’s like a zombie.  I keep shooting him and he gets right back up.

4.Name some­thing about your­self that you are proud of.

In 2008 I helped survivors of a fundamentalist Christian health program(Mercy Ministries), shut down their operations in Australia.  They did the hard yards but I was happy to give them support and technical help and my blogging time.

5.What is your favourite book?

Too many favourites for lots of different reasons.

6.What quirk or habit do you have that most peo­ple aren’t aware of?

I like doing poor attempts of English regional accents, mostly after watching shows like Gavin & Stacey and Doc Martin.

7.Name your favourite char­ac­ter and explain why.

Wash from Firefly or almost any character that Alan Tudyk plays.  Strikes me as a good guy, the everyman, humour and courage that isn’t gung ho.

8.Name some­thing that most peo­ple dis­like but you secretly think is awesome.

Vegemite and cheese melted over bread in the microwave.

9.What is the last lie you’ve told?

10.What do you wish peo­ple knew about you?

Hmm. Not my secret identity obviously.

Nobody, I am pretty happy being a CIS white male in an affluent country and the grass always seems greener until you’re standing on it.

The Victims Recipients of the Much prized Liebster award are:

You readers.  Feel free to leave a link in the comments to your post. You can use the same questions as above.

This post was brought to you by TMI industries.