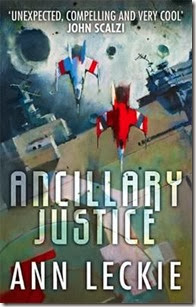 If I am truthful I tend more toward fantasy than science fiction in my own reading.  Sure, I have read a smattering of earlier science fiction works, like Childhood’s End by Clarke, Come Hunt An Earthman by Phillip E High and  I have tried reading and listening to PK Dick but find him not to my taste.

My love of science fiction started, I think with Star Wars and probably deepened a little later with Frank Herbet’s Dune.  So recent Space Opera works like Leviathan Wakes have hit that sweet spot - space adventure on a more or less epic scale but obeying the laws of physics a little tighter.

Ann Leckie’s Ancillary Justice sits nicely in my comfort zone but is a little more epic in scope than SA Corey’s work.  We have a galaxy spanning empire, sentient ships with corpse soldiers on ice but it’s also refreshingly grounded in its description of other human cultures, of a humanity dispersed throughout the galaxies.  The blurb describes it aptly as “Inventive and intelligent space opera”.

Our protagonist is an AI, more specifically a sentient ship called the Justice of Torren, one of the many sentient ships of different sizes that the Empire of the Radch has used in its ever expanding annexations(read invasion and subjugation) of other human societies.  The Empire is thousands of years old, old enough for most humans to have forgotten that they originated on Earth, for other societies to have risen and fallen.

Like all good stories Ancillary Justice is set at a time of change, the very last Annexation has taken place.  Justice of Torren orbits the planet Shi's’urna and concurrently, serves through its capacity to operate as Ancillaries (corpse soldiers under the control of the central AI), as a security force and aide to the human Lieutenant who acts as a de facto governor on the planet’s surface.

Or at least that’s half the tale – because when we meet The Justice of Torren it is the last remaining Ancillary, Torren One Esk or Breq as she/it prefers.  Leckie switches between the scenario above and the arrival of a singular Ancillary on the planet Nilt.  The annexation of Shi's’urna has occurred twenty years previously and Leckie delightfully builds tension as she switches backwards and forwards in time.

From very early on the reader knows that The Justice of Torren, the ship that can see through the eyes of thousands of Ancillaries, has been reduced to only one in the present, some great calamity has befallen it.  How that happened and the implications unravelling that mystery reveals, is what drives this novel for much of its length.
A character who narrates in the first person but that for a good portion of the novel is almost omniscient presented, I am sure, some challenges for Leckie.  How do you present a character that simultaneously observes from dozens of different points, who can measure the heart rate and temperature of everyone on the ship and a large number of people on the surface of a planet?  Although it felt a bit unusual at first (in a narrative sense), Leckie’s solution builds on itself and gives a sense of what it might be like to be Justice of Torren without bogging down the flow of the story.

The approach to gender in Ancillary Justice was also clever.  Justice of Torren is an AI who can inhabit a ship, a body or bodies. It has experienced a number of cultures and annexations and frequently in the text it expresses a concern over whether or not it has used the right gender pronoun for the language/culture it is engaged with.  Consequently, sometimes the same character is referred to as he or she or designated male or female.

I get the impression that the pronoun she was used far more than he, that most of the characters were female.  I even have to stop myself from referring to Justice of Torren as a she above because that’s what I feel though I don’t think that’s explicitly stated in the novel.
Have I made this assumption because culturally ships are female or because there is a preponderance of female pronouns in the text. If I were asked who the male characters were in the book I couldn’t name them with certainty.  Their are characters referred to as both male and female depending on who Torren is communicating with but this seems distanced from any biological markers. What I think Leckie was going for was a book where gender was largely irrelevant, where it was fluid dependant on culture and where it didn’t matter really to Torren or the story.  I would be interested to read reviews by female readers or even a gender queer response to it.

In terms of a reading experience the initial mystery and world building drew me in and by the time I was hooked the disparate timelines had coalesced into one and the story picked up speed toward its conclusion. I am left with a sense of depth in the world building and genuine desire to see where the story goes. If you like a bit of mystery and a fresh take on galaxy spanning empires I think its very much worth a look.

This book was a review copy provided by the publisher.

Australian readers can pre-order Ancillary Justice here.
Did you enjoy this review? Would you like to read more? You can subscribe to the blog through a reader, by Email or Follow me on twitter.
Posted by Sean Wright at 3:58 PM