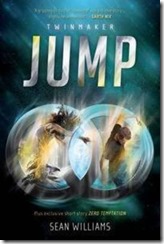 Jump, called Twinmaker in the US, is Sean Williams’ foray into teen science fiction, he’s well known as a NY Times bestselling novelist of adult scifi and he’s also done a great children's series in conjunction with another Australian author Garth Nix - Troubletwisters.

In the world of Jump we have solved our environmental and power problems, we can teleport from anywhere on the face of the planet to anywhere else there is a D-mat booth. We can fabricate and recycle the goods that we need.  It’s a post scarcity world.  Fully connected through the Air (an outgrowth of the Internet).  You can live in Switzerland and go to school in California.  It wasn’t all smooth sailing to get here though, there were the water wars, global warming has submerged islands and Manhattan’s streets lie underwater.  But the world is safer.

Or so our protagonist believes.

Clair and Libby are best friends, Libby is the go getter, the popular girl.  Clair is the plodder, together they balance each other.  Libby rushes headlong into things and Clair picks up the pieces. Then there’s Zed the jock who is going out with Libby but harbours feelings for Clair, feelings that Clair thinks she shares.

And here the reader might pause and think – this sounds familiar.  Two friends fall out over a boy and we have a novel about mean girls ripping each other to shreds over him.  I must admit that not being a heavy reader of fiction marketed at Teens, even I raised an eyebrow at this setup.  Indeed I am aware that some readers walked away at this point thinking that the novel might deteriorate into a form of slut shaming where Libby would blame Clair for any intimate action with Zed and Zed would get off scot-free.

Clair and Zed kiss and she realises it’s a mistake, a betrayal of friendship (we never quite get to hear his thoughts due to the novel’s point of view) but before they can both talk to Libby,(secretly unhappy with her appearance) she chooses to try out Improvement - a spam message that promises she can change what she dislikes about herself.

And from this point we are led on an adventure as Clair, Zed and a host of outcasts try to undo the damage Libby has done to herself.  In the process they discover the world and technologies that they thought were safe, aren’t.

Other reviews have expressed concerned or have been unsure about the cheating (the kiss) mentioned above. It’s a very real scenario, people cheat.  What’s important here is the character’s reaction.  The reader can experience that reaction vicariously and be aware of what it might be like to cheat on someone or be cheated on, they can begin to develop empathy in that regard.  Not all teens learn, nor should they learn from first hand experience.  I would have though that’s one of the great advantages of storytelling in any format.

I don’t want to say anymore.  Williams plays with reader expectations to good effect, I think the setup above is necessary for him to surprise the reader in the rest of the novel.  A novel that is more about growing up, accepting consequences and discovering the meaning of true friendship.  It’s about the complexity of growing into adulthood with the added bonus and pressure of having to save the planet.  Big stakes emotionally and physically.

What I like about Clair is her growing self confidence, along side her introspection.  There’s a tendency in some fiction to present strong women in terms of what it means for men to be strong i.e. they have to be able to kick ass and take names, carry a sword or a gun.  While Clair does carry a gun she’s never comfortable about it and her first thought is to use her smarts.  When she does attempt physical conflict, even when she wins, she hurts herself  - as an untrained teen would do.  She feels very real to me.

With that story at its core the wonderfully envisaged future world is icing on the cake.  Williams does a great job of extrapolating current technologies, trends and social behaviours to give us a familiar yet exciting future.  The text is sprinkled with a dusting of ideas that hint at a fully realised world.  And for much older readers I am pretty sure that there’s a Devo reference somewhere around page sixty.

Jump is a well paced action adventure with a great female protagonist.  I eagerly await more books in the series.

This review is based on an ARC bearing the American cover.

You can pre-order the book through Booktopia.