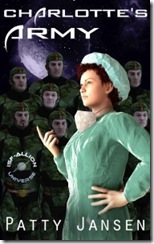 Charlotte's Army is a novella set in Patty Jansen’s ISF- Allion universe – a character driven group of stories with a solid hard science underpinning.  Other works in the series are: Luminescence(novelette), His Name in Lights (novelette) and Shifting Reality (novel).

All the works can be read independently of one another and in any order - they occur at different times in the “world history” but together weave an interesting and expansive backdrop.

I have seen the works classified as Space Opera/ Military Science fiction but don’t find either of those categories particularly helpful for describing Patty’s work.  She tends to work with protagonists that fall outside the standard for military/space opera fiction.  The heroes here are scientists, teachers, and doctors.

In Charlotte’s Army our protagonist is a medical officer involved in coding mindbases for the ISF clone program.  Great effort and resources have been ploughed into a program that will deliver an army of clones ready to defeat Allionist forces.

Only there’s one small problem, each of  the clones seems to have developed a romantic obsession with Charlotte – all several thousand of them.

If it was anyone else I might have found the premise a bit of a stretch.  But I have come to trust Patty’s judgement as an author, that and I have just had my computer crash so the idea that an error in coding could cause a massive glitch is not outside my personal experience.

I enjoyed the rather humorous predicament that Charlotte was put in and the philosophical issue’s that surround the act of fixing the clones (essentially wiping their personalities).

As with all of Patty’s work I liked the drip feed of background or technical detail.  We are not given a treatise on the way spaceflight occurs or how gravity works on the ships but their are pointers that indicate that Patty has this worked out.  And because she has it worked out there’s no “clangers” that drop you out of the story.

I think if you are after a balanced read with, some action, some romance and a focus on story then you’ll enjoy Patty’s series and Charlotte’s Army. It’s accessible and interesting in a lot of ways that your standard military Sci-Fi might not be (war stories in space).

Charlotte's Army is a novella so there is limited room.  I think that it could have easily been expanded into a full length novel, and that’s my only qualm with the work.  The ending felt a little truncated.