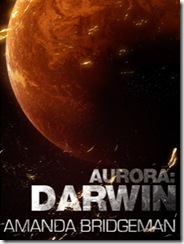 Aurora: Darwin is the debut novel from Perth author Amanda Bridgeman.  The folks at Momentum publishing have done a great job with the cover art (reminiscent to my mind of the Astropolis covers that Orbit did for Sean Williams) and associated extras. They can be found here.  Not entirely necessary for your enjoyment but good art can shape your perceptions.
Bridgeman is a fan of sci-fi thrillers and that shows in Aurora: Darwin. If you are a fan of Aliens 2 and other Sci-Fi films of that era then you’ll like the mix of action and suspense that Bridgman delivers.

A distress signal on the edge of inhabited space. A mission that is far outside normal parameters. Two very different people with one common goal survival.

A group of soldiers are sent to investigate a comms error on a classified military station near the asteroid belt.  Three women are added to the all male crew as part of some PR exercise.  There’s tension between the crew, between the Captain and Command and information on the situation is almost non existent.
There’s some interesting comment here on the treatment of women in the military that seems to be more about current problems that women have to face. Though I must admit I am not sure if its unrealistic to think that attitudes won’t have changed in the future or that its a case of (as with a large amount of science fiction) science fiction commenting on the issues and culture at its time of writing through the lense of the future.
If you are looking for a solid scientific underpinning and the lack of such ruins your enjoyment then perhaps Aurora: Darwin isn’t for you.  If you are just here for the thrill and the tension then, well it’s worth it.
The above point aside, Aurora: Darwin was not without its problems for me and I think this can be put down to it being a first novel.  The beginning was a little slow and I think there was an over use of narrative summary, a focussing on detail that was largely irrelevant to the story.  I am a pretty tolerant reader and I read widely. I am not sure that other readers would stay as long as I did.
But…
I did and the middle 50% of the book is nail-biting edge of the seat action and suspense that I expect from much more seasoned writers.  The tension that Bridgeman maintained here was brilliant.
The story is nothing new (and I mean this as no slight against Bridgeman) but there’s skill in taking a trope or a well used scenario and making it seem exciting and fresh.  The reader knows what’s likely to happen and it’s the way in which the author sustains the tension, between that knowledge and the characters edging closer to danger, that makes this part of the novel and ultimately carries the rest of it.
The ending seemed a little off the pace for me, there was renewed tension but I found the team’s last obstacle a bit of an anti-climax, the action and tension was highest at the end  of the second act.
While Aurora: Darwin feels a little unbalanced structurally, on the middle part of this book alone, I will read Bridgeman again. I dare say she’s got a bright future ahead of her writing Military/Space Opera thrillers.