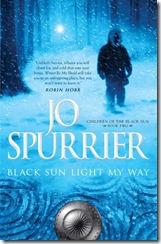 Black Sun Light My Way is Jo Spurrier’s second novel and the follow up to Winter Be My Shield (reviewed here).  It’s book two of what I suspect will be a trilogy, though it’s ending surprised me – it didn’t feel like the traditional middle of a trilogy.  I like to be surprised and I am eager to see what Spurrier does in the final book.  I thought I had a handle on where she was going, now I am not so sure.

At the end of Winter Be My Shield, Sierra having managed to learn some control of her powers lets herself be caught by Akharian slavers in an attempt to get closer to Isidro and the potential treasure hidden at Demon Spire.  An uneasy alliance is formed between Rasten, Isidro and Sierra as they manage to manipulate the Akharian’s and gain access to Vasant’s treasure trove of Ricalani magic.

Much of what I thought to be the goals of the major characters seemed to be resolved by midway through the story.  It turned out to be a decoy by Spurrier an easy victory before she really tightened the screws on the characters.  Much of the tension achieved in this novel comes from the testing and twisting of bonds between those characters.  Much of the physical danger and tension comes again from isolating the characters from their allies and from each other.

Rape as a threat to characters and bystanders features heavily in Black Sun Light My Way.  Spurrier, as she did in Winter be My Shield, didn’t restrict the threat or act to female characters.  I like( appreciate maybe is a better word) that she takes this realistic approach ( modern fantasy seems to skirt around the use of rape in conflict as a weapon used against all genders) but the prevalence of it as a way to manipulate the readers emotions came close to being overused for my reading.

There was some anachronistic dialogue that jarred with me much as it did with book one, phrases or figures of speech that sound out of place because they are modern.  But then we are reading fantasy; who says fantasy needs to be written in with an equally unrealistic 19th century English vocabulary?

What continued to impress me was Spurrier’s research and her use of it in bringing the Wild alive as a very visceral setting. Pregnancy as a plot device was an interesting and realistic addition to the story and adds another layer of emotional connection between characters that I am sure Spurrier will use against the reader in book three.

Despite the points mentioned above Spurrier has an engaging style.  This was an easy book to slip into but very hard to get out of -  I read from midway to the end in one setting.  If you are a fan of Trudi Canavan’s work and are prepared for the adult content then I heartily recommend Black Sun Light My Way and Winter Be My Shield.

An interview that I conducted with Jo for Galactic Chat can be found here.

This review is part of the Australian Women Writers Challenge 2013.  Please ch

eck out this page for more great writing from Australian women..