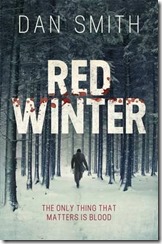 Red Winter is a historical thriller set in Russia in the aftermath of The Great War, the  time of the Russian Civil War and the time of The Red Terror when the Bolshevik secret police, the Cheka, carried out mass killings, torture and suppressions of the various groups that sought to resist the revolution.

Kolya is returning home with his brother who has died on their trip.  Tired from too long spent fighting, first against the Germans, now against the enemies of the revolution. He hopes to find his wife and sons, to bury his brother next to their parents, to live a quiet life.  Only when he arrives the village is empty, as if everyone simply walked out.  Desperate and unsure if he is dreaming or losing his mind, he comes across the sole surviving member of the village, so malnourished and raving that he does not recognise her at first.

When he tries to ask about what has happened to the villagers and his family, all she will talk about is Koschei, and how it was his doing.  Koschei the Deathless, a fairytale bogeyman of Russian myth. Kolya begins to think her insane until she shows him the forest.

What follows is a journey across a country and a culture being torn apart by violence and mistrust.  A journey to discover if Koschei is real, if Kolya’s family are alive.

I had heard of Koschei the Deathless, but I didn’t know his tale.  Smith, through Kolya, retells the tale(or one of them) and is ingeniously vague about the outcome.  I think Smith does a good job of balancing the tension between the outcome of the fairytale and the outcome of Kolya’s story.

I found Red Winter to be deceptively well paced. It’s related in the first person.  It initially feels slow and ponderous; a tale in which you very much feel the weight of the landscape, the cold and the despair of a man who has lost almost everything.  Like the fairytale form that it shadows though, there is a magic here, born out of a compelling mystery. This is Russia in 1920, it’s not a land of fairytales, no matter how much the reader might like it to be for our protagonist. Much of Smith’s success comes I think from balancing the readers expectations between a fairytale ending and a realistic one.

The tension was so well played for me that I ended up reading it in two sittings, staying up until the early hours because I had to know if our hero triumphs. With a more literary sensibility and by that I mean a focus on the internal landscape of Kolya’s character as much as the external story I was never quite sure, even til the last page just which way it would go.

In tone it felt very much similar to that of Scandinavian crime writing that’s been hitting the shelves.  Whether that stems from the characterisation of the setting; bleak northern European winters or from the fact that the period covered is pretty much untouched in the public consciousness, I am not sure.

If you like fairytale as a metaphor, modern European history, or a compelling mystery with an edge of horror, I heartily recommend it.