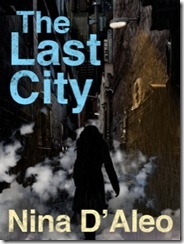 The Last City by Nina D’Aleo is one of the growing number of novels that have been picked up by the PanMacmillan digital offshoot Momentum.  It's available in both digital and print on demand format as per Momentums business model.

The Last City was characterised as Perdido Street Station meets Blade Runner.  I haven't read the Miéville title but going on online summaries I can see the comparison.  With D’Aleo’s Scorpia we have an ancient city, that is falling down in as much as it is being built up. Comparison could be made to the Mega Cities that feature in 2000 AD as well.

The allusion to  Blade Runner is apt in that hi tech is juxtaposed with the crumbling mish-mash of a patchwork city.  To my mind it lacks the hardboiled single detective element though. It’s mystery/investigation elements have their roots more in recent police procedurals like CSI.

Scorpia – the last city of Aquais – where the Ar Antarians rule, the machine-breeds serve and in between a multitude of races and species eke out an existence somewhere between the ever-blazing city lights and the endless darkness of the underside.

As a spate of murders and abductions grip the city, new recruit Silho Brabel is sent to the Oscuri Trackers, an elite military squad commanded by the notorious Copernicus Kane. But Silho has a terrible secret and must fight to hide her strange abilities and monstrous heritage.

As the team delve deeper into Scorpia’s underworld, they discover a nightmare truth.
Hunted by demons, the Trackers must band together with a condemned fugitive, a rogue wraith and a gangster king and stake their lives against an all-powerful enemy to try to save one another and their world.

To this setting D’Aleo brings a plethora of diverse races and a magical abilities tied to bloodlines and evil curse worked sorcery.  If I could praise one thing about D’Aleo’s work its the originality of her world building around races and their abilities.  It’s definitely not elves and dwarves with small transistor radios stuck to the side of their head. She’s put a good deal of work into giving the reader something fresh to look at while telling an interesting story.  The names and places, the nomenclature of the world of The Last City is colourful and fresh.

It begins as somewhat of a police procedural and I liked the band of Oscuri Trackers that we were introduced to.  A group of misfits who shouldn’t be able to work together but somehow do. D’Aleo gives the reader poorly lit streets, tensions between races - I was prepared to knuckle down into a good “hard as nails” techno fantasy version of CSI.

Then we changed tack a bit and the tale tends to become larger in scale - we move towards the epic adventure.  Now there are plenty of police procedurals that start with the small events that go on to reveal conspiracies but the scale is still small i.e. uncovering a small group of corrupt but powerful conspiring politicians.

This change in itself was okay but I think that D’Aleo tried to keep a foot in both camps and I found it hard to settle again. Was this detective fiction or epic adventure?

D’Aleo is great at painting the setting of Scorpia, a place that you can smell and see, a setting with real texture.  This works well for the small scale mystery less so for the action adventure, which to my mind needs to move fast. There’s a scene where we are introduced to the multitude of gangs that inhabit the seedier parts of Scorpia. We are treated to beautiful rich descriptions of the various gangs and their affiliations. Only two of these,however, feature throughout the rest of the novel - I can’t help feeling that D’Aleo would have been better served giving us broad brushstrokes on the less important gangs for the sake of pacing.

I also found it difficult to decide which character I should be rooting for.  That’s not to say that each book needs to have one main protagonist but I did find myself at a loss as to who to place most of my care in until nearer the end of the novel.  In the end it was the comical character of Eli that seemed to identify with the most and I am not sure if shouldn’t have been Silho Brabel.

Original and ambitious, The Last City is part mystery, part police procedural, part epic world saving adventure and I am not sure if some of the elements quiet work together. The book, however is full to the brim with a rich detailed setting.   I’ll be very interested to see which direction D’Aleo takes with book 2.

If you are a fan of Games workshop’s gothic infused 40K and its spinoffs like Necromunda you should check it out.